Take Down (A Mason Sharpe Thriller Book 2) by Logan Ryles

The gang wants him. The DEA needs him. Mason may be a lost kid’s only hope. Take Down by Logan Ryles is book 2 of the superb Mason Sharpe action thriller series. Perfect for fans of Lee Child, Jason Kasper & David Archer. 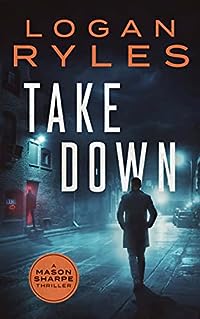 Take Down (A Mason Sharpe Thriller Book 2)
by Logan Ryles

Passing through Atlanta, all Army veteran Mason Sharpe wants is a break. A break from the rain. A break from the grief he’s carrying. A quiet campsite beneath Georgia pines where he can wrestle his demons into silence.

Fate has other ideas.

Eager to leave the city, Mason doesn’t get the cops involved when he catches a kid trying to steal his truck. Jalen is fifteen, confident and smart, but headed down an ugly path. Mason drives him home, advising him to get his life back on track.

Later that night, the DEA explode into Mason’s seedy motel room. They’re convinced Jalen is the key to dismantling the South Atlanta Squad – a brutal drug gang dispensing deadly fentanyl across the region.

But Mason’s not buying the DEA’s story. Where they see a hardened gangster, he sees a lost kid caught between a rock and a hard place.

Mason isn’t looking for a fight, but he’s not the kind to run from one either. He realizes there is only one way to save Jalen. Mason will confront the gang himself, and if they won’t back down, he’ll do what he does best – a terminal take down.