The toaster started smoking. Not the regular kind of smoke, but fire kinda smoke. I quickly unplugged it, grabbed my oven mitts and carried it outside to a concrete pad. If it was going to die a fiery death, it wasn’t going to do it in the house. Hubby and I watched it for a few minutes to see what it was going to do. It did nothing. Hubby grabbed the toaster and shook it like a Polaroid picture. Crumbs flew all over the yard. The birds were sure to have a good day with that. After we were certain the toaster would not burst into flames we brought it back inside. Hubby immediately ordered a new toaster online. It would be here in two days. So for two days I have been making toast while wearing oven mitts for when it catches fire. It always smokes, but no fire yet. My baby bassets know the new procedure with the toaster. Wear oven mitts and never leave the toaster alone while toasting. I had no idea I loved toast this much. Seems a bit extreme. 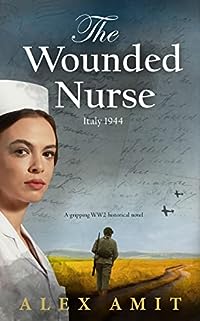 Italy 1944, Grace, a military nurse, is injured in a German plane attack and loses her leg. For her, the war is over.

Lying in a military hospital south of Rome, Grace decides to escape the convoy back home. She wants to recover, become a nurse once again and tend to other wounded soldiers.

John, who was blinded from his injury, lies in bed next to her and at night Grace begins to read him letters from the woman awaiting him back home. He’s the only one who doesn’t see her disability.

But, as Grace becomes more attached to John, she realizes that he will never love her and that maybe she should date Henry, a bomber pilot from the nearby airfield who is courting her, making her forget about her love for John.

Who will Grace finally choose? Will she succeed in being a nurse once again despite her injury? And will John fall in love with her eventually?

Through her own eyes, Grace tells the story of a young woman who struggles to recover and find love in the chaos of World War II. 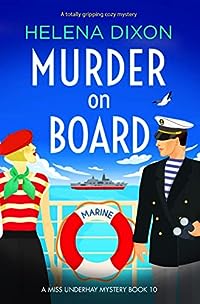 Kitty Underhay is drowning… in murder.

Kitty Underhay hopes for plain sailing as she caters a 21st birthday party for the Chief Constable’s daughter aboard a luxury paddle steamer. So her heart sinks when she learns that the man her fiancé Matthew has been tailing on orders from Whitehall, Gunther Freiburg, is aboard. And she’s even more horrified when she steps below deck to discover Gunther, dead in the engine room. One of the Chief Constable’s party must be responsible for his demise, but who, and why?

And the evening is on course for further disaster. As the lights go out around the candlelit cake, a terrible scream rings out over the merry hubbub. A priceless diamond necklace has been snatched from around the birthday girl’s neck… Something fishy is going on, but is this the work of the same sailing assassin, or is it a red herring?

With the local inspector in deep water having to investigate his own boss, Kitty and Matt dive in to help. But when Kitty’s eavesdropping puts her in mortal danger, will everything turn out shipshape, or will it be her turn to go swimming with the fishes… ? 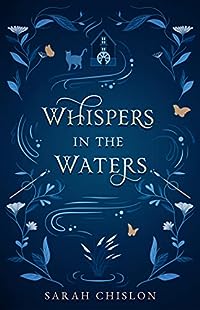 Whispers in the Waters (Blood of the Fae)
by Sarah Chislon

Ladies certainly don’t admit some taint of the fae has touched their souls — unless they wish to find themselves confined to an Institution.

Gently-bred herbalist Jessa Caldwell is trying to be a lady. She conceals her true nature amongst her plants and her sketches — where she can almost shut out the whispers she alone hears. But a threat to her beloved aunt forces her from the comfort of home to a town perilously near an Otherworldly Crossing, with its ever-present risk of fae incursions.

To protect her aunt and the townsfolk she comes to care for, she must uncover the individual responsible for a series of increasingly dangerous attacks — but to find this saboteur will require embracing the part of herself she fears most, an act that could cost her dearly. In a world where Vigilists lock up fae-touched mortals, Jessa must decide if she’s willing to risk exposing her true nature to obtain the truth and protect those she loves.

Whispers in the Waters, a gaslamp fantasy novella, serves as the prequel to Tattoo of Crimson, the first book in the Blood of the Fae series. If you like quick-minded heroines who solve cases with logic and intuition, Otherworldly intrigues, and beautiful yet deadly fae, then you’ll love this mystery set in a world of manners and mythical monsters. 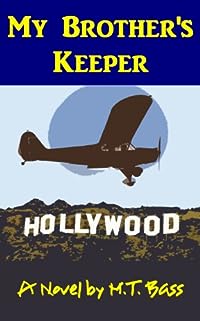 Hollywood, 1950 – Former P-51 fighter pilot A. Gavin Byrd is on location for a movie shoot, when he gets a call from the police that his older brother, a prominent Beverly Hills plastic surgeon, has been found dead on his boat. The Lieutenant in charge of the investigation is ready to close the case as a suicide from the start, but “Hawk” doesn’t buy it and decides to find out what really happened for himself.

With help from a former starlet ex-girl friend, a friendly police sergeant whose life was saved in the war by his brother and a nosy Los Angeles Times reporter, Hawk’s search for the truth takes him through cross-fire, dog fights and mine fields in Hollywood, Beverly Hills, Burbank and Las Vegas, and leads him into some of the darker corners of his brother’s patient files and private life that he never knew existed 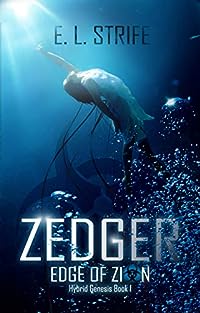 War is in their DNA. Marci, ex-commander turned rebel, aims to destroy the Astral’s hybrid genesis program which captures her people and builds them into soldiers for their armies. Astrals, those of High-born blood, not mutated from the toxins and radiation, rule from their protected cities with savage weaponry and the ranks of redesigned Tellurians.

I escaped the experiments of Project Zedger, which alters us for the Astrals’ bioenhanced military, Occupational Cybernetic Corps. OCC protects Zion from other Astral countries, but it also maintains order within its boundaries. Us soldiers are mutated, spliced with animals, or cybernetically restructured to do the most damage without objection. I was one once, Bravo class, a cybernetic hybrid, a commander.

I hated that my kind died because of my orders, Genesis’s orders. It’s why I broke free.

Genesis Hub controls everyone. It consumes your thoughts and controls your actions through a splay that squeezes the back of your brain. It makes us kill our own kind. Tellurians dwindle in numbers with every passing day. Project Zedger must burn. Genesis must fall. Only I have the skills and potential to make that happen. The others who have different minds like mine are all still in service.

Levi, my recently rescued Crisper, is in desperate need of a regulator to control the massive amounts of Cerithymite nanotech the doctors pumped into him. He was dumped not far from where I live with a piece of my old splay in his head. It’s a message from my designer. My hideout has been discovered by OCC Snipes. My time is up. Ingrid is on to me.

I have a plan that just might save Levi and free us all, but I risk Ingrid gaining control of me and another mobile army. I’ve already taken more lives than I’ve saved. I won’t help her take over the world.

My memory is a mess of fragments from my time in service. All I know is Commander Marci saved my life, and I can’t get too far away from her. Something about her calms the storm in my blood. When she leaves, I am inundated with pain, like a million stinging ants clawing their way out of my skin. I hope she can figure out what I am. I hope she can fix me. If I live, I swear, I will protect her with my life.

I’ve monitored Marci for years under the orders of a rebel Astral. I don’t think Marci remembers me. Zedger screws with your head, stirs up your concept of identity with too many synthetic thoughts. You start to wonder what’s real. It’s why us Disconnects and rebels have to stick together. I wish I could talk to Marci, tell her everything, tell her I’m sorry for getting us both into this. I don’t want to go back in to get her out, but I fear I might have to. Astrals love to torture us. They mutated me to like pain, to crave it in battle. I’ll do what I have to, to protect her. I owe her that much, at least. 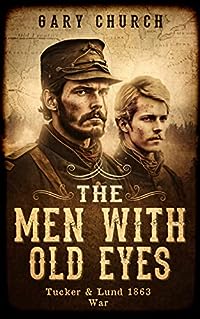 The Men With Old Eyes: Tucker and Lund 1863 War
by Gary Church

March your way across the battlefields of the American Civil War and share adventure, pain and danger with Ellis Tucker and Gunnar Lund as they fight for survival against gunfire and disease, while Beatrice Hays waits at home for Tucker, her fiancée.

In the next two years, the three will face a multitude of obstacles they must overcome if they are to survive and have a life after the war. From Harrisburg, Pennsylvania, to the battlefields of Virginia and on to San Francisco, California, they experience adventure, fear, pain, danger and romance in a quest to make their plans come true.