Deep Thoughts Because Of Oatmeal

I had a bowl of oatmeal this morning, so I knew I would be brushing my teeth for a while. During that time I was contemplating if throwing all self control out the window 12 days before Christmas was too soon. I flip flopped quite a bit between the upper and lower teeth, but eventually landed on waiting a few more days to make Christmas cookies a regular breakfast meal.

Life was a whole lot easier when the dead stayed dead.

I thought I was human. Apparently, I was wrong.

I didn’t even know there were non-humans. Others, they’re called. Fairies, vampires, even the bogeyman — they’re all real. At least, that’s what the werewolf told me when I saved her from the cops.

Did I mention that I saved a werewolf? And those weren’t just cops trying to kill her. They’re a deadly cult with the sole purpose of capturing and torturing Others… especially me. Because it turns out I’m not just any Other. I can talk to the dead — and this cult has questions only I can answer. Answers they want to use to wipe out every non-human on the planet.

My name is Gideon Black, and I’m not human. I am the DeathSpeaker.

And I am so screwed. 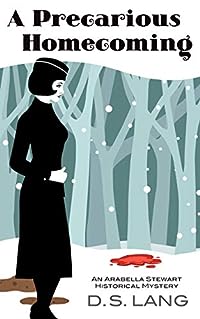 A small town and resort struggling to survive. A young woman grieving losses. A new constable fighting to keep his job. And a murder whodunit to unravel.

When Arabella Stewart returns home from serving as a United States Signal Corps operator during the Great War, she not only finds her hometown and family resort besieged by troubles, she comes across the dead body of a neighbor. The murder is the most serious in a string of crimes plaguing the area. To complicate matters, the victim is a bully and a brute with multiple enemies.

Eager to solve the case, Bella convinces Constable Jackson Hastings to let her help. Jax — her childhood buddy, her girlhood crush, and her brother’s best friend — harbors conflicting feelings. His own job is in jeopardy if he does not find the killer quickly, but his guilty conscience over Matt Stewart’s death in the trenches is a powerful barrier between him and Bella. Still, they share a common goal — solve the case before someone else dies and before irreparable harm is done to the community and to them. 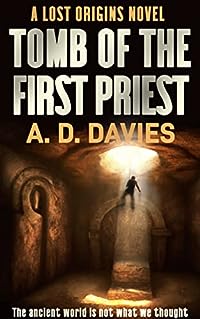 Tomb of the First Priest: A Lost Origins Novel
by A. D. Davies

The ancient world is not what we thought.
In the city of Prague, freelance treasure hunter Jules has finally located the bangle stolen from his dying mother, an artifact that may unravel a centuries-old secret: the location of an ancient tomb hidden from the world by one of Christ’s disciples.

But when a reclusive, ruthless billionaire beats him to the artifact, Jules joins forces with an institute of unconventional archaeologists who reveal to him clues penned two thousand years ago. Clues that support the claim his mother’s bangle holds properties that science cannot explain.

As both parties race to decipher the bangle’s origins, they uncover a trail meant only for the holiest of men, leading to an apostle’s manuscript, the hunt for a tomb alleged to conceal great power, and a breathless, globe-trotting adventure that threatens to destroy them all.

From Prague to London, Europe to Asia, Tomb of the First Priest launches the Lost Origins series, each book charting a new story exploring gaps in humanity’s long history. 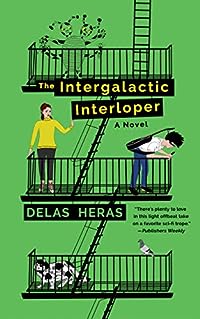 The Intergalactic Interloper: a novel
by Delas Heras

A neighborhood is turned upside down when an alien lands on a New York rooftop.

In this charming debut novel we meet the residents of an East Village block whose lives are thrown into turmoil by an extraterrestrial visitor. There’s a wanna-be rock star, his eccentric rabbit-loving neighbor, a cursed superintendent, and a ghost-obsessed old woman, along with a remarkable cat. Their intersecting paths are all drawn up towards the otherworldly creature lurking overhead.

When Ollie spies a two-headed turtle from outer space on a nearby rooftop he wonders if he has lost his mind. His incredulous friends certainly think so. To make matters worse he lands in hot water at his bookstore day job and his cat has gone missing. His bandmate Zara offers to help him track down the troublesome feline, and they join forces with a nosy starlet to follow a trail of clues that leads them inexorably up toward a mysterious rooftop creature who would much prefer to remain hidden.

The Intergalactic Interloper is a lighthearted romp through a bohemian New York world, a one of a kind novel that is as memorable and interesting as it is fun.

Where will the evidence lead… ?

Wanting to help, Brad secures her a position as a singer in the local Saloon, where she quickly proves a hit, catching the eye of the recently arrived Hap Hazard.

But Hazard has troubles of his own, with a gang of outlaws hot on his trail and out for his blood.

Meanwhile, ranch owners are being murdered and their backs viciously burned off, as if to hide something.

Are the strangers in town and the murders connected?

And more importantly, what secret is hidden on the backs of the dead?

Can Brad and his trusted manservant-turned-mayor Merridrew solve the case before more bodies pile up?

Merridrew Follows The Trail is a classic murder mystery set in the wild west that will grip readers from the first page until the final, unexpected conclusion. 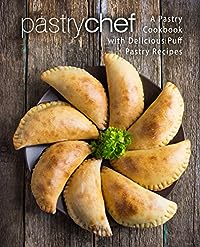 In this book we focus on Puff Pastry. Pastry Chef is a complete set of simple but very unique Puff Pastry recipes. You will find that even though the recipes are simple, the tastes are quite amazing.

Here is a Preview of the Puff Pastry Recipes You Will Learn: