I have been going on and on about the Halloween decorations that I have been making with hubby, but not showing any pictures. I finally got it together and took a couple for you. I still have four more cats to paint. When I shine the black light on them it gives me and extra boost of motivation to get moving and finish them. I am really excited to see how they look in the buffet when its all set up.  THEY ARE SO CUTE!!! 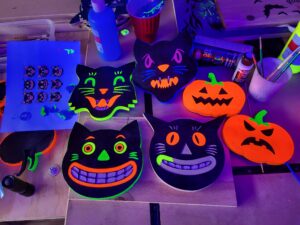 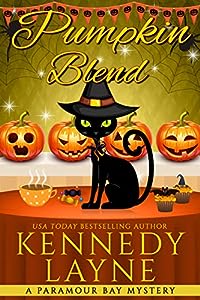 Pumpkin tea blends aren’t the only things that are being stirred up in the next baffling whodunit of the Paramour Bay Mysteries by USA Today Bestselling Author Kennedy Layne…
All Hallows’ Eve is only a fortnight away, and the residents of Paramour Bay can’t wait to get their hands on all the candy corn, caramel apples, and pumpkin tea blends this fall season. As a matter of fact, the highly anticipated Halloween Festival is about to kick off in town square with the reveal of the largest pumpkin that has ever been grown in their very own local pumpkin patch.

There’s only one itsy-bitsy problem–someone has stolen the town’s prized jack-o-lantern! Raven ropes Leo into solving another mystery, but he goes all in when he realizes that a pilfered pumpkin is the least of their worries!

Fill up your candy bowl, grab your favorite pumpkin-flavored drink, and get ready to solve the perplexing case of the missing prized pumpkin! 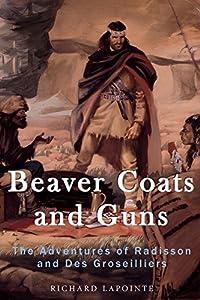 Beaver Coats and Guns: The Adventures of Radisson and Des Groseilliers
by Richard Lapointe

The year is 1652, and the French of New France are at war with the Iroquois Confederacy. In a raid on a small St. Lawrence River settlement, enemy raiders capture sixteen-year-old Pierre Radisson and take him to their village near present-day Albany, New York.

There, he is adopted and trained as a warrior. A year later  afraid for his life  Pierre escapes and returns to New France.

During a pause in the war, Pierre takes part in a doomed Jesuit mission to convert the Iroquois. Following another harrowing escape, he sets out on the greatest adventure of his life.

Combating Iroquois along the way, Pierre and his brother-in-law, Médard Chouart, Sieur Des Groseilliers, with their Algonquin partners, embark in canoes for Lake Superior. There they will meet the peace-loving Cree, who hold the key to the beaver pelt treasure they seek.

Beaver Coats and Guns is a novel inspired by the real-life adventures of Radisson and Des Groseilliers. Follow them into the northern wilderness on their incredible quest for beaver pelts. Meet Native North Americans when they were independent and vital to the fur trade. Discover, too, how their endeavors led to the founding of the renowned Hudson’s Bay Company. 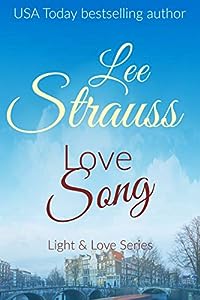 Katja Stoltz is used to tough times — an abusive stepfather, life on the streets, a musical dream that keeps shattering — but it’s hard to compete with the ghost in Micah Sturm’s mysterious closet.

The Baroque beauty of Dresden Germany can be breathtaking, but it can also be bitterly cold. After being tossed onto the streets by her unfeeling roommates, Katja fears there’s only one recourse left for her. The oldest profession on earth.

Micah’s the one to pick her up, but he surprises her with his no strings offer — a place to stay until she gets on her feet.

If only it weren’t for this undeniable attraction between them, a gravitational pull they both struggle to resist. Katja can’t help but fall in love.

But Micah has a secret that could ruin everything.

Will Katja find happiness on her quest for the truth about Micah? Or will she miss out on her Love Song?

The greatest scientific challenge of our age wasn’t to enable time travel, it was to prevent it. The laws of physics had turned out to be idiotic, erecting no barriers to hopping time. In fact, they make it hard to avoid. I’m in the business of preserving the timeline — making sure the world sticks to the sacred rule of One Second Per Second, and that history unfolds according to plan. The problem is, there is no plan until I make it. 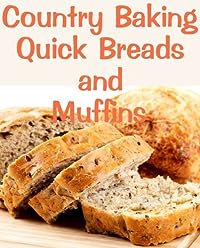 Quick Breads can be made in minutes, since they do not require the prolonged kneading and lengthy rising and proofing. Instead of yeast, these breads are made with rising agent such as baking powder or baking soda that begins to release gas bubbles the moment it is moistened. When making quick breads, it is important to blend the wet ingredients separately and combine then just before baking. Swift, gently mixing is essential because if the batter is beaten too vigorously, the gluten in the flour will strengthen the mixture and the texture of the loaf or muffins will be tough. Also added some of our favorite coffee cake recipes, perfect with morning coffee, snacks or desserts. 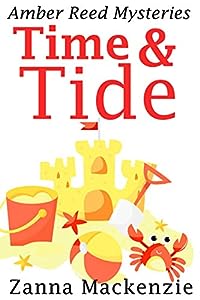 When you’re a trainee sleuth things rarely go to plan…

Which is why Amber Reed and on-again-off-again special agent ex-boyfriend Charlie find themselves in deepest and darkest Cornwall when they were expecting to be cracking the case on a television dance show.

So, now it’s down to Plan B…
Melrose Morgan is landscape garden designer to the stars and has TV shows and numerous books to his name. When he inherits the gorgeous Treganwy House and Country Estate in Cornwall he soon discovers someone wants him off the scene – and they’re not pulling any punches in their campaign to destroy him.

As Amber and Charlie delve into numerous complicated and surprising family histories, uncover startling Cornish myths and legends and try to keep their client and themselves alive all while tracking down the bad guys, things get distinctly dangerous, devious and devastating.

Can they get to the bottom of mysteries galore and catch the criminals? Will they manage to solve their relationship difficulties or call things off for good this time? Could trainee agent Amber’s sleuthing career be over before she even has chance to properly try and impress her bosses?