The Antunite Chronicles by Terry Birdgenaw is an allegory for modern times, where innocents are attacked by those seeking power. When a tale about the joy of friendship is eclipsed by the horrors of war. Grab your copy today! 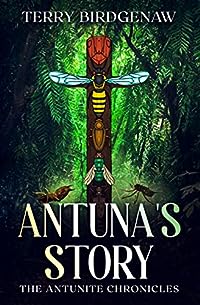 Imagine yourself sucked through a wormhole.
Could you thrive on a far-off planet?

You’ll love Antuna’s Story because she knows the secret to survival.
Antuna understands her multi-insect colony must work together to flourish.

But what happens when evil forces corrupt her world?

Antuna and her unlikely bee, spider, and termite pals face struggles between instinct and intelligence, and altruism versus aggression.

Can diversity triumph over discrimination, and inclusiveness trump segregation? 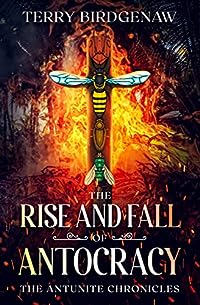 Anthiery and his mate Antianna fight to uphold diversity in their insectoid world and against wars brought on by a corrupt ruler Antilla.

But when the antocracy fails, the ruthless autocrat Antilla does not tolerate descent. His draconian rule crushes all opposition and pushes the planet to the brink of ruin.

Anthiery, Antianna, and their friends must fight or flee, and the planet’s survival is at stake.

An allegory for modern times, where failing democracies place our planet in peril.
When a tale about the joy of discovery is eclipsed by greed, deception, and unbridled power.

What becomes of their beautiful planet? 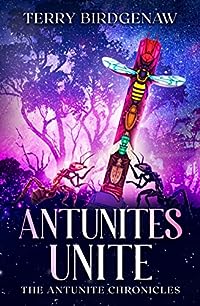 Generations after cyborg insects return to their revitalized planet, a draconian red ANT ruler takes over the colony exterminating other insectoids and enslaving brown and black ANTs by genetic and social engineering.

The queen BEE on the planet’s moon must rely on two tiny ants, Rose and Jasper, raised amongst their enemy, to infiltrate the Antalone cyborg elites. They must dismantle a dystopian regime that uses histrionics, bionics, and socionics to subjugate its populace.

An allegorical Brave New World that is out of this world, where the fate of the Antunites depends on chameleon ANT spies who plot a revolution to unshackle their kin.

Can Rose and Jasper accomplish what no ANTs have before them?