I am going to be a bridesmaid in my friends wedding, and yesterday we picked out dresses. It was a pretty fun time hanging out with wonderful women trying on beautiful dresses. I have been friends with the bride since freshmen year in high school, and we were like two peas in a crazy pod. Time and life is a bit of a bother though, and our busy lives have kept us apart. I am ashamed to say that we could go a few years without speaking. Ya.. that bad. I was thrilled when she called me up to tell me she was getting married, and wanted me to be in her wedding. After the joy though came the dread. I will need to try on dresses, and with people I have never met! Not to mention I have been living in sweatpants for the last three years. Oh man… I have really enjoyed the elastic waist on those suckers. So it probably comes as no surprise that I had nightmares and quite a bit of anxiety about the dress shopping. When I showed up my friend and her bridesmaids all greeted me warmly and I started to relax a bit. I did not relax at all about the dress though, and when the bride pointed out her favorite dress, I freaked and said I’ll take it. I quickly tried it on, said good good, and ripped it off as fast as I could. I made sure not to look at the dressing room mirror. I have three months. Three months is plenty of time…. Right? 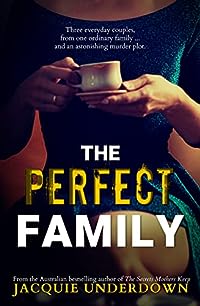 The Perfect Family: A domestic thriller that will get inside your head
by Jacquie Underdown

Three everyday couples, from one ordinary family… and an astonishing murder plot.

Outwardly, The Radcliffes are a typical suburban family. But anyone close enough to them will know that it’s all for show.

Anthony and Belinda have it all — the looks, the big house by the water, and a successful business. Vaughn and Paige couldn’t be more in love, and they can’t wait to start a family of their own.

But underneath, each couple is in crisis and there is one cause. Out of options and their backs against the wall, they discover that murder isn’t a tool reserved only for criminals.

Hot Under the Collar (The Dogmothers Book 1)
by Roxanne St. Claire

Book One (all stand-alone titles) of a Series for Dog Loving Romance Readers!

Firefighter Braden Mahoney is devastated when his beloved Weimarener, Jelly Bean, fails the canine arson investigator test. Faced with the challenge of raising the money for advanced training, it’s Braden’s sweet grandmother and her best friend who suggest he use the services of the new event planner in town. Not that he needs a push in Cassie Santorini’s direction. Ever since she arrived in town, Braden has had his eye on the sassy Greek goddess… and can’t stop thinking about getting the rest of him on her, too.

Cassie has spent years putting family first, even moving to Bitter Bark when her mother falls in love with the local veterinarian. Having a huge new extended “family” is fun, especially when one smokeshow of a firefighter attends the gatherings, but Cassie has no plans to remain in the small town. She’s ready to pursue her big city dreams. But when Braden asks for an assist for his precious pup, Cassie agrees to help him set up a town-wide scavenger hunt. It isn’t exactly a hardship to be around those blue eyes and brawny shoulders, especially since they both agree everything — even the undeniable sparks that crackle between them — is temporary.

But when temporary gets complicated by feelings that might lead to forever, Braden and Cassie start to question the direction they’re headed. Should they follow their dreams… or their hearts? It’ll take a dog with a bad nose and a good heart, two meddlesome grandmas, and some help from the clan that loves them to make sure Cassie and Braden follow the clues and find their way to each other’s arms. 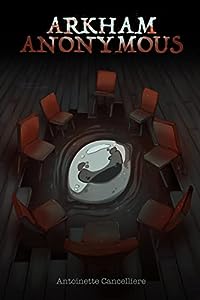 As you walk into the basement, people sitting in a circle tell stories of cosmic horrors. Stories that cannot and should not be told depict a man stuck inside a never-ending nightmare. The dream filled with horrors embodies; a college student searching for the nameless church only to find oblivion, an assassin sent to kill a demonic rabbit and a young, trans woman kidnapped for sacrifice to an underground cult. The stories defy all comprehension. Welcome to Arkham Anonymous. 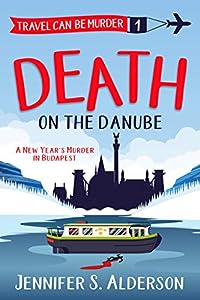 Death on the Danube: A New Year’s Murder in Budapest (Travel Can Be Murder Cozy Mystery Series Book 1)
by Jennifer S. Alderson

Who knew a New Year’s trip to Budapest could be so deadly? The tour must go on – even with a killer in their midst…

Recent divorcee Lana Hansen needs a break. Her luck has run sour for going on a decade, ever since she got fired from her favorite job as an investigative reporter. When her fresh start in Seattle doesn’t work out as planned, Lana ends up unemployed and penniless on Christmas Eve.

Dotty Thompson, her landlord and the owner of Wanderlust Tours, is also in a tight spot after one of her tour guides ends up in the hospital, leaving her a guide short on Christmas Day.

When Dotty offers her a job leading the tour group through Budapest, Hungary, Lana jumps at the chance. It’s the perfect way to ring in the new year and pay her rent!

What starts off as the adventure of a lifetime quickly turns into a nightmare when Carl, her fellow tour guide, is found floating in the Danube River. Was it murder or accidental death? Suspects abound when Lana discovers almost everyone on the tour had a bone to pick with Carl.

But Dotty insists the tour must go on, so Lana finds herself trapped with nine murder suspects. When another guest turns up dead, Lana has to figure out who the killer is before she too ends up floating in the Danube…

Introducing Lana Hansen, tour guide, reluctant amateur sleuth, and star of the Travel Can Be Murder Cozy Mystery Series. Join Lana as she leads tourists and readers to fascinating cities around the globe on intriguing adventures that, unfortunately for her, often turn deadly. 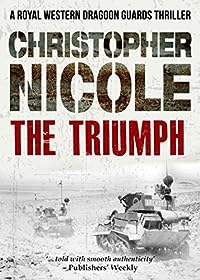 Sir Murdoch Mackinder is placed in charge of a secret intelligence department.

Their task is to drop saboteurs into occupied Europe.

However, after a lifetime of leading his troops into battle, Mackinder finds it difficult to accept the role of despatching men and women to their probable deaths.

When the commander of a mission into the Balkans suddenly dies, he cannot resist the temptation to go himself.

As the Balkan situation heats up, Murdoch is forced to remain in Yugoslavia almost until the end of the war, fighting with Tito, and finding himself a comrade in arms of his old adversary, the beautiful daughter of Chand Bibi, who is now a Russian agent.

At the same time, he unwittingly rivals his own sergeant-major for the love of his dead brother’s widow, Annaliese Reger.

Spanning fifty years of action and adventure, The Triumph is the rousing finale to Christopher Nicole’s epic series telling the story of a man who became a legend and his honoured regiment.

With The Triumph, Christopher Nicole concludes the story, begun in The Regiment and continued with The Command, of Sir Murdoch Mackinder of the Royal Western Dragoon Guards.