THE MIDWIFE CHRONICLES by Carole Penfield

THE MIDWIFE CHRONICLES is a historic 17th century family saga trilogy . Book one is a fast moving adventure, full of twists and turn, in which midwife Clare Dupres faces imprisonment and loss of her children unless she can flee the clutches of King Louis XIV’s dreaded Dragonnade soldiers. Book two is the compelling coming-of-age story of Clare’s daughter Lucina. And Book three is the exciting conclusion, which introduces Jane Austen’s remarkable ancestress as a character. 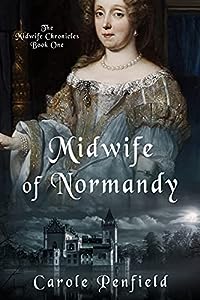 Midwife of Normandy: The Midwife Chronicles–Book One
by Carole Penfield

King Louis’ dreaded Dragonnades are galloping towards Maison Dupres… They carry his order to seize the Dupres, A Huguenot family. But what is Clare’s crime? 1680 France. Clare Dupres is not your average midwife. Her successful career relies on an ancient family secret formula (the magic elixir) which provides a pain-free birthing experience, offered solely to her wealthy aristocratic patients. In return, she is richly rewarded with gold and jewels. Clare’s husband Jacques resents her working outside the home but is too weak to stop her.
King Louis XIV detests Huguenots and is determined to convert them to Catholicism or eradicate them. He begins to tighten the noose by quartering troops in their homes until they abjure their religious beliefs. Bans them from singing psalms or leaving France without official permission. In 1682, he issues an edict forbidding Huguenot midwives from delivering babies, which delights Jacques. But Clare rightly senses that things will only get worse. She urges her husband to relocate their family to England, where she can resume her profession. Jacques blindly refuses, relying on the Edict of Nantes to protect their religious freedoms.
UNTIL IT IS TOO LATE! in 1685, the Edict is revoked. A vengeful servant wrongfully accuses the Dupres of violating the restrictions. Jacques is devastated. Clare’s only hope of saving her family is to devise a clever escape plan, but she must act quickly.

Full of twists and turns, this fast-paced adventure will keep the reader in suspense until the final page.

Recommended for readers who enjoy stories about strong women and are eager to learn about a dark chapter in 17th century French history. Perfect for fans of Call the Midwife, The Midwife of Hope River, and The Huguenot Chronicles. 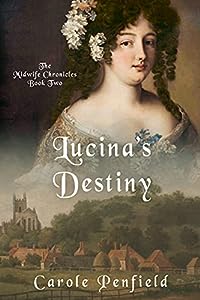 This spellbinding sequel to Midwife of Normandy recounts Lucina’s coming-of-age story as she begins her exciting new life in England after a harrowing escape from France. But she finds living with her mother’s childhood sweetheart and his wife can be fraught with tension… and the French Authorities are searching for the fugitives!.

1685. London. The Dupres join the childless London household of Jacques’ brother Pierre. His melancholic wife Celia adores the children but is terribly jealous of Clare. Lucina, an inquisitive child with exceptional perception and the added gift of second sight quickly discovers that sparks still fly between her mother and Pierre.

Meanwhile, Aunt Celia is horrified that Lucina is destined to follow the ancestral path of midwifery and tries to spirit her away from London with promises of an idyllic genteel life in her tranquil village. As hopes of Jacques’ survival fade, Clare finds that London does not offer the opportunity to continue her midwifery profession because she is considered a dissenter. Unwilling to be parted from her children and seeking a safer environment than the teeming city, Clare moves with Pierre and Celia to Tunbridge. She writes an incriminating letter to her old friend Lady Louise in Normandy, disclosing her new village address.
But wait! Lady Louise is under suspicion for aiding the Dupres escape, and Lucina senses if this letter falls into the hands of the French authorities, King Louis will arrest the Marquise and know where to find the Dupres. Using her psychic powers, Lucina manages to temporarily avert danger by causing a long delay in the letter’s delivery. Nonetheless, it arrives at the worst possible time. Once again, Lucina sends “mind messages” to France causing a series of fast-paced events there.

As years pass. Lucina is torn between the conflicting desires of Aunt Celia and her mother to determine her future. An unexpected suitor for Lucina’s hand in marriage complicates matters further. Wil she abandon the Dupres’ midwifery tradition?
A series of disasters forces Lucina to come to terms with her own destiny, as the plot takes unexpected twists and turns towards a stunning, surprise conclusion.

A Masterful Blend of Drama, History, and Romance 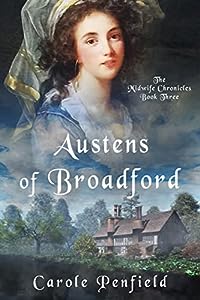 Austens of Broadford (The Midwife Chronicles Book 3)
by carole penfield

A rich, sweeping historical novel, inspired by the true story of Jane Austen’s remarkable great-grandmother… Marriage to John Austen IV, presumptive heir to the family fortune, was a dream come true for Eliza. Until his cantankerous father turned it into her worst nightmare.

1702. England. Despite having a loving relationship with her husband and seven children, Eliza is not the wife John Austen III would have chosen for his only son. She complains to Lucina (her midwife and best friend) about struggling daily with the overbearing tyrant’s interference. He plants a spy in her nursery, criticizes Eliza constantly, reneges on promises of financial assistance, and turns her eldest son against her. She begins to dread that if the curmudgeon outlives his son, she will be left penniless and debt-ridden.
Without a dowry, Eliza worries timid daughter Bettybird will never attract a husband. But through the young girl’s narrative voice, we see her coming of age into genteel society. Whilst attending a house party to celebrate Queen Anne’s coronation, Bettybird meets actor Bart, son of a doxy who is searching for his landowner father. Coming to Kent as a footman, handsome Bart portrays life among the gentry social class from a servant’s perspective.
When Eliza’s worst fear materializes, she makes the most difficult decision of her life, but not before writing a scathing memorandum detailing her mistreatment, which passes down through the Austen family into the hands of her great-granddaughter Jane.

It is widely believed Jane Austen was influenced by Eliza’s memorandum when she wrote about money, social class, and the evils of inheritance laws in Sense & Sensibility and Pride & Prejudice.