Winner of the 2005 Malice Domestic Award, MURDER IN EXILE followed by REDUCED CIRCUMSTANCES, EXILE TRUST, and CONTEST OF WILLS in The Frank Cole Mystery series, along with the theater-themed mystery DEATH TROUPE, are all well paced and expertly written mysteries that will have readers cheering for the characters from page one. Enjoy! 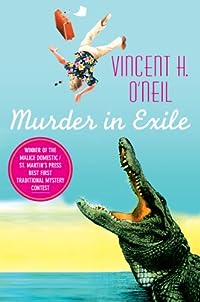 The fully dimensional world of a long-running series is harder to find in a first mystery. There’s nothing tentative, though, about Vincent H. O’Neil’s debut novel, MURDER IN EXILE, which drops an engaging young sleuth into a sleepy little burg in the Florida Panhandle and hands him a tough case to cut his teeth on. Frank Cole landed in the coyly named town of Exile when his computer company up North went bankrupt and a nasty judge attached his future earnings. Frank is keeping his head down doing background checks for an insurance company when his investigation of a hit-and-run accident uncovers evidence of corporate corruption. Although you’d never guess it from the silly jacket art that makes his book look like an absurdist Carl Hiaasen knockoff, O’Neil is a polished storyteller with a breezy style and some interesting things to say about abandoned sons and their surrogate fathers. (Article by Marilyn Stasio) 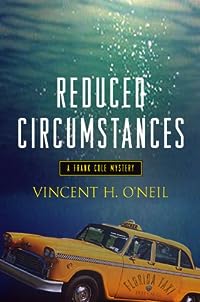 The sequel to the award-winning Murder in Exile starts out in high gear:

Fact-checker Frank Cole is moonlighting as the evening dispatcher for the Midnight Taxi Service. It is a quiet Spring Break in the Florida panhandle until a nervous teenaged boy flags down a Midnight cab near a parking lot full of flashing police lights. The next evening, suspicious strangers start appearing at the taxi stand, asking Frank about the boy and where he was headed.

The ride speeds up after that. The driver who took the fare runs off, the teenager is revealed as a man with a past, his beautiful blonde girlfriend joins the chase, and a dead body turns up holding a Midnight Taxi Service roadmap. Once again, Frank Cole has to answer questions about a dead guy he never even met in life.

“Frank, Frank, you’ve got to help me!” She clung to me tightly, and while this was not unpleasant I had to remind myself that this was the same girl who could enter a room, sit and eat a sandwich, and leave without touching anything that would take a fingerprint.
“Easy there, easy.” I said uncomfortably, feeling her tremble and considering for a moment that she might actually be in trouble. “What’s happened?”
I tried to pry her loose, but she was a lot stronger than her size said she’d be, and she locked on fiercely.
“These two guys, they came by and said Dennis owed them some money, and now they say I owe it to them! I don’t know what they’re talking about, Frank!”
“It’s okay, it’s okay.” I offered, trying to regain control of the situation. Things like this don’t usually happen at my place, and never at one in the morning. I finally got a good grip on her upper arms and pushed her back a few inches. She’d definitely been crying, and she looked ready to have a nervous breakdown, so I put an arm around her before leading her into the living room. 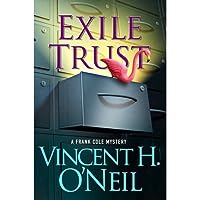 Frank Cole is grateful when his friend, Exile (Florida) Police Chief Denny Dannon, throws a little work his way. The new job is with an Exile bank anticipating an audit of its safe deposit boxes by a regulatory agency. It seems the records have not been well kept and the bank would like to find the whereabouts of some of its box-holders before auditors swarm in. Frank is not a licensed private eye, but a former software developer/entrepreneur, now a “fact-checker,” who works with insurance and investigation companies – so the job’s right up his alley.

Susan Wilmington, the bank’s new manager of the safe-deposit box department, is at first on the defensive but soon figures out that she and Frank will work well together. Susan confides in Frank that she has misgivings about a man she recently allowed into Dorothea Freehoffer’s safe deposit box without going through all the proper procedures… and asks Frank to check it out for her.

As it turns out, Mrs. Freehoffer is dead and the man who supposedly accessed the box – her husband Andy – died a year before she did. One thing leads to another and soon Frank is hot on the trail of… of what, he doesn’t exactly know.

I love the character of Frank Cole. He’s in the Panhandle of Florida after his software development company up north folds, leaving him in an ocean of debt. His lawyer/friend convinces him he needs to lay low for awhile, taking on small jobs for small pay and hoping to convince his creditors he’s not worth pursuing. (In that, he’s a bit reminiscent of Elaine Viets’s protagonist in her dead-end-job mysteries.) I also love the name of the fictional town of Exile, Florida. How perfect!

The wind picked up a bit just then, and a flickering movement caught my eye in the darkness. Almost exactly in the middle of the muddy rectangle where the foundation had sat, a single reinforcing rod stuck up like a finger. A piece of red paper fluttered on the rusted flagpole at waist height, and I wondered how it had survived the elements for all that time as I approached.
I got my answer when I reached out and stopped the tag’s movement. The string which secured it to the re-bar was white and new, and so was the tag. Someone had thoughtfully laminated the small piece of red paper, but even so it was obvious that it had been placed there recently. The digging might have occurred long ago, but the tag was quite new.
I turned it over, at first unwilling to believe what I was seeing. On both sides, written in large script with a black marker, were the letters RIP.
For the second time in as many days, I announced to an empty space that Andy Freehoffer’s impersonator was playing with my mind. 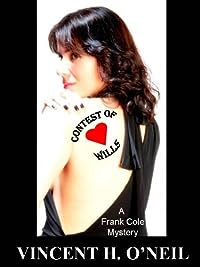 When background-checker Frank Cole takes a new job at a Tallahassee law firm, he has no idea what’s in store for him. The firm’s lead investigator, brash Jimmy Hanigan, takes him under his wing right away. A little later, the firm’s owner tells them that his old friend and client Chester Pratt has died under mysterious circumstances — and that Pratt’s will is missing.

Thomas Pratt, wearing an unbottoned dress shirt over a dark pair of trousers, greeted us at the door with a bottle of whiskey in one hand and a large black revolver in the other. His eyes were wild, and he appeared to have been crying. He didn’t remember us at first, but that might have been better than what happened when he did.

“Well hello!” he muttered in a low, throaty voice which scared me much more than if he had shouted. “Looks like my good friends from my Pop’s law firm. The guys who were only trying to help.

“Well have a look!” he raised his voice only slightly as he waved the bottle behind him. We could only see down a short hallway from where we were standing, but that didn’t seem to matter to him. “Yep, the place is empty! Ya wanna know why?

“So my kids wouldn’t have to see their daddy getting arrested. That’s right! I sent ’em away with their mother. Can you beat that? The cops think I killed my own father, and that means I have to send my family away.”

He stopped himself then, and took a lurching step deeper into the hall before beckoning with the gun. “But where are my manners? Come in, come in, do come in! Heck, you invited yourselves here the other day, so why not come in?”

He was backing away now, a bit more certain in his footing, and the gun was pointed right at us. I honestly expected Jimmy to say we wouldn’t be joining him, so it was a bit of a surprise when he walked past me. I was downright shocked when I followed, looking at my feet and wondering why they were moving.

And you could have knocked me over with a feather when I reached out and shut the door behind us. 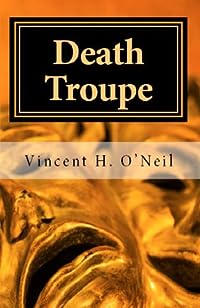 The Jerome Barron Players have a problem. Their writer, Ryan Betancourt, has killed himself under mysterious circumstances and they need a replacement right away. The Players, unofficially known as Death Troupe, come together once a year to perform a high-end murder mystery play written specifically for that season’s host town. Their writer has to possess special talents, as there’s a wager involved: If the townspeople can correctly identify the murderer before the show’s final act, they don’t have to pay for the engagement. So far, no town has ever won the bet.

It is only then that the troupe’s advance man, private investigator Wade Parker, tells Jack of the strange events which surrounded the group’s previous engagement in Red Bend, California. A local retiree killed himself a few days after the performance — an act Wade suspects was prompted by the storyline of Ryan’s final play. He also reveals that Ryan was greatly unnerved by anonymous third parties who had interfered with the group’s marquee clue distribution.

This is one of the unique features of Death Troupe: As the performance approaches, clues are sprinkled through the town in a variety of ways, from fake headstones bearing characters’ names to real players acting out their assigned roles. In Red Bend, a stranger pretending to be a troupe member had dropped clues that were surprisingly accurate, and Ryan had reacted badly to this — perhaps badly enough to kill himself.

Events take a sinister turn shortly after Jack arrives in the small, snow-covered village of Schuyler Mills. Someone leaves a bizarre arrangement of black roses and plastic skulls in his hotel room. Ryan’s missing notebook from the Red Bend engagement turns up, and it contains an alarming tale of psychological harassment. The people of Schuyler Mills are enthusiastic about Jack’s presence, but he knows that many of them, from the local community theater group to the town mayor, could have ulterior motives.

As the weeks go by, someone begins distributing clues that Jack doesn’t recognize, from a plastic head stuck in an ice-fishing hole to confidential information scrawled on a billboard. Reading Ryan’s notebook, Jack begins to fear that the same web that snared his old writing partner in Red Bend is being spun around him in Schuyler Mills.