An Oracle Walks into a Bar by Scott Burtness

Messy breakup? Want your stuff back from your ex? Shapeshifter August Shade can help. For a reasonable fee, he’ll get your favorite whatever back and hopefully not die in the process. An Oracle Walks into a Bar by Scott Burtness is a darkly funny urban fantasy that is sure hook readers from page one. Enjoy! 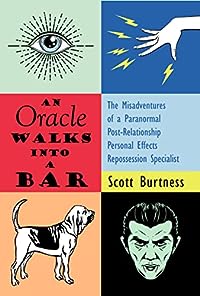 When a power-hungry elf hires August to get her favorite book back from her vampire ex-lover, August figures it’ll just be another job. Except that vampire is the meanest vampire this side of Canada, the book bestows its reader with the power to write their own future, and the elf isn’t the only one that wants the book. Things go from bad to worse when a horoscope-writing oracle starts having visions of the end of the world, and August pops up in all of them.

The cranky shapeshifter can change into a lot of things, but can he change the future? Haunted by a dark past, plagued by the oracle’s predictions, and grappling with his penchant for making bad decisions, the only sure thing about August’s future is that it looks short.