I Dream Of Jogging

Hubby and I have been watching a horror series on TV for the past two nights and of course it’s giving me nightmares. Horror is not my usual thing, but when we started the series it was more 80’s retro / science fiction and not that scary. Now it’s getting to be a bit more gory. That’s not my complaint this morning though. I am a bit bummed that the running from monsters that I have been doing in my dreams does not count towards my cardio for the day.  If I am going to run that much in my dreams I would really like it to burn a few calories. Someone needs to invent some sort of hat that you wear at night that has electrodes that connect to your muscles. When you run in your dreams it zaps your muscles and has the same effect as running. There! I have done half the work already. Someone make it happen. 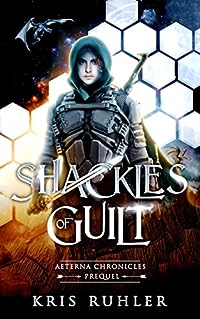 Shackles of Guilt: A YA science fantasy prequel novel to the Aeterna Chronicles
by Kris Ruhler

He’s the boy next door. She’s a princess. But when blood and war reach their doorstep, will they unite or be forever pushed apart?

Young and ambitious Earmon has climbed up the ladder in Levitor city to become the Queen’s topmost advisor. He seems to have everything he’s dreamt of but for one thing: princess Zenithia’s love.

When he witnesses an intruder inside the city and decides to keep it quiet, he unwittingly unleashes a terrifying chain of events. His friend, Turak, has an episode that results in a fracture in Levitor’s shield, and the horde of Reavers prowling outside the city advances.

In a world of intrigue, blood, and war, Earmon must battle for survival against savages and beasts.

His hardest trial is yet to come, and he will have to face a choice no one should ever have to make: protect the life of the one he loves the most at the risk of losing his own.

In the end, will he be enough to save her and the city?

He’s a cowboy widower with wounds in his past. She’s a brokenhearted city slicker, seeking refuge. Can rancher Rhett Montgomery overcome his bitterness and loss for a second chance at love?

When Danielle Roberts discovers her husband of three years is cheating on her, her life falls apart. On a whim, she retreats to the small town of Cedar Falls, freshly divorced, and hoping to lick her wounds at Montana Wilds Ranch Resort.

Rhett Montgomery works himself to the bone, burying the sorrow of his past in his business and avoiding his sister’s attempts at pushing him back into the dating pool. So when one of his ranch hands is injured and a long term visitor with clear blue eyes and long dark hair offers to take his place, he refuses her help. But his sister intervenes, and before he knows it, he’s stuck with a female ranch hand.

Why does he have a feeling this is just another one of her set-ups?

Too bad he’ll have to squash any hopes of a blooming romance between him and the newcomer.

Yet somehow, the more he pushes Danny away, the more she softens his heart of stone.

Fans of Virgin River will fall in love with the town and residents of Cedar Falls. One-click to read this sweet western romance.

She only went out that night because she’d promised a friend.

She wakes up, naked and bound in an abandoned cottage in the middle of nowhere. Dappled light comes in through a dirty window. Her body is covered in cuts. Across the room her friend groans in pain.

A shadow passes the window. He’s back.

He picks up a knife. He begins to cut her friend. In that moment of bloody frenzy, Nic wrenches free and runs.

She’s finally safe. But this is just the beginning.

Detectives Asha Harvey and Aaron Birch arrive at the scene hours later. There is no body, there is no sign of the killer. It’s as if it never happened.

YOU THINK YOU KNOW HOW IT ENDS? THINK AGAIN. 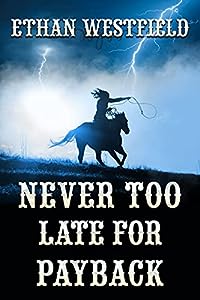 Never Too Late for Payback: A Historical Western Adventure Book
by Ethan Westfield

A decade ago, Hildy Harding, the 10-year-old daughter of a millionaire businessman, was mysteriously kidnapped by an evil man. Despite a note that seemed to express regret and directions regarding where she could be located, the child was never found. The Pinkerton Agency will try to solve the case once more ten years later, but no one is holding out much hope…

Will the agent assigned to the case have what it takes to uncover the true cause behind Hildy’s enigmatic disappearance?

While nearly everyone has abandoned hope, the lionhearted agent Wade Hampton reaches a different, yet tentative, conclusion. To everyone’s shock, Hampton discovers that Hildy was kidnapped by a ruthless rival businessman who hated her father. No one ever truly expected that she was still alive, let alone that she was among the Pawnee tribe.

After meeting for the first time, Hildy and Hampton choose to band together and seek revenge against the merciless kidnapper who robbed her of her childhood. However, their growing feelings for each other, as well as shocking revelations about the case, pose a challenge to the endless search. Even though it seems as though their fate will have them die young, will their skills help them survive this spiral of violence and vengeance? 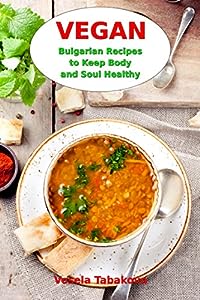 They are all easy to prepare, tasty and will help you increase your daily intake of vegetables, herbs and vitamins.