Many die along the Trail, but to embark on such a magical adventure and behold its ultimate treasures, all shall be gladly risked! Grab your copy today and begin the amazing adventure of The Fabled Quest Chronicles by Austin Dragon! 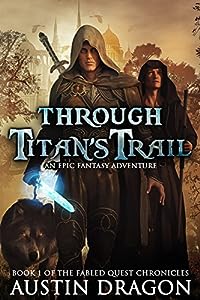 Every three years it arrives — The Kings’ Caravan to the legendary city of Atlantea. From the far reaches of the Seven Empires of Pan-Earth, men travel from Avalonia — the sole gateway into the realm of the Magical Lands for the year-long journey along a path created by the ancient Titans themselves.

It is a journey like no other through unimaginable dangers, both mortal and magical, of men and monsters, by day and night — all to reach the limitless riches of the magic kingdom of Atlantea. Only under the protection of the Four Kings — the Kings’ Caravan — is such a journey possible. Or is it?
A new alliance forms under the stranger known as Traveler as the most fantastic and deadliest adventure of all time, this fable quest, begins!

Through Titan’s Trail is Book One of the Fabled Quest Chronicles.

In the Shadow of the Kings: Fabled Quest Chronicles (Book 2)
by Austin Dragon

With shadowy monsters and dark magic, the Kings’ Caravan almost killed them all before the quest had even begun! But why?

They escaped the treachery and dark magic of the Four Kings of Xenhelm, but not without losses. However, the Fates have smiled upon them all with the stranger — and now their leader — known as Traveler. He is a human who has not only traveled to the fabled kingdom of Atlantea before but lived there. They are now the new Titan’s Caravan.

They cross beyond the Lands of Man into the Lands Between, and into Faë-Land — or, more precisely, Faë-Land Minor — the lands of fairies, sprites, and giants. Here they must travel and survive to find fae members to add to their caravan. “We cannot make it to Atlantea as a caravan of humans alone,” Traveler tells them. But which fae–fairies, sprites, giants, elves, or any one of the many fae races unknown to humans?

They had escaped but they still travel In the Shadow of the Kings. Every step they take and every encounter with a new fae town or city could be a new trap. And there are new creatures and hostile fae races as diverse and dangerous as anything the humans can imagine.

Many have died along Titan’s Trail, but they are undaunted as their caravan grows with both fae and fantastic beasts. Their magical adventure will take them to many magnificent places and horrific battles. But to attain the ultimate treasures of Atlantea, all shall be gladly risked.

In the Shadow of the Kings, Book Two of the epic fantasy adventure Fabled Quest Chronicles begins! 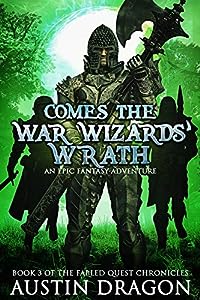 They made it to Faë-Land Major — the lands of elves, fauns, centaurs, and goblins!

Titan’s Caravan is no longer merely an impressive caravan of humans — royals, berserkers, and a shape-shifter. Through many surprises and seeming setbacks, their numbers include humans, fairies, sprites, giants, elves and a multitude of other fae races and magical animals. The path is clear–the next markers along Titan’s Trail then to the Great Forest.

However, nothing is ever that simple in a long quest, and in the Lands of Magic, less so. They escaped the Four Kings but not their war wizards or their agents throughout Faë-Land. They face many enemies, but they have also gained many allies against the Xenhelmians.

Continue the epic fantasy adventure of Titan’s Caravan against the war wizards’ wrath, caravan wars, and evil creatures, including one feared above most others!

Can Titan’s Caravan make it to the Great Forest, let alone to their final destination of the fabled kingdom of Atlantea coveted by human and fae alike? 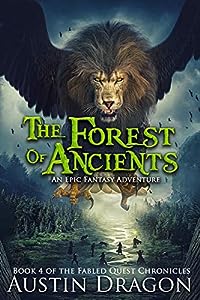 Do Not Anger the Great Forest!

Their departure from the Lands of Man for the magic lands is a distant memory. Titan’s Caravan survived the war wizards of Xenhelm and have marched past Faë-Land itself–the lands of fairies, sprites, elves, centaurs, and goblins. But now they leave all human and fae civilization behind to continue their quest along Titan’s Trail.

But what monsters and magic await in the Great Forest? Giant beasts and mythical creatures — either beautiful or evil, either harmless or horrific.

The lead giant, Grakdar, scoffed. “… no animal that large is friendly when the tallest among us is only eleven feet tall. We giants do not call this the Great Forest. We feel that name lulls one into a reckless and foolhardy sense of admiration. It is the Giant Forest and there is no pattern to the size of animals within it. You may encounter a fifteen-foot squirrel and then a swarm of twenty-foot fire ants or a thirty-foot snake.”

Traveler leads their Titan’s Caravan onward. They do so not only under the shadow of the evil Four Kings of Xenhelm and the Forest’s own magical and frightful “wildlife” but a mystery that has confounded elves and fae for centuries.

The fabled kingdom of Atlantea draws nearer — or does it?

THE FOREST OF ANCIENTS is Book Four of the epic fantasy adventure Fabled Quest Chronicles! 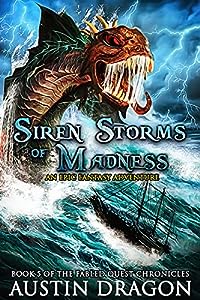 “We sail to the fantastic Kingdom of Atlantea at Last!”

The Fabled Quest Chronicles continues in Book Five of the epic fantasy adventure series — warrior mermaids, storm-summoning sirens, and sea serpents large enough to rise and block out the sun.

They began their caravan in the Lands of Man. They traveled through Faë-Land Minor-the land of fairies and sprites, then across Faë-Land Major-the land of centaurs, elves, and goblins. They almost died in the Great Forest. Yet, none of those magical regions were as dangerous or vast as the Oceanus Omnis-the ocean realms ruled by merfolk, water fae, sirens, and sea monsters.

Their year-long march, guided by the man called Traveler with his shape-shifting dog, reaches its final leg in their journey along Titan’s Trail.

But what of the Four Kings and their dark allies who hunt them?

And what dangers lurk beneath the near-bottomless depths of these ancient oceans?