It’s my favorite kind of grocery shopping today. Well, besides shopping for camping trips. I love those because I get to pick out a lot of candy and cookies. The next best thing is shopping for holiday dessert. Hubby requested that I only get one dessert and it should be a pie. I have firmly believed all my life that pie is breakfast food and does not qualify as a dessert. Especially not after a delicious brisket. No.. pie alone will not do. There will be cake. I want to be at least a little healthy, so I am going to try to find a nice carrot cake. Carrots are healthy…ish. Kinda off the subject, but last time I was at Costco I saw a five gallon bucket of frosting. Just saying. Anywho… I will get the pie for hubby, but I will also get a cake. Better to ask for forgiveness than ask for permission. 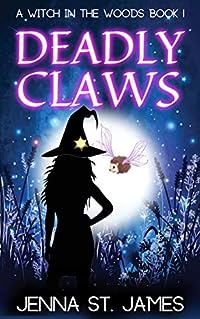 Deadly Claws: A Paranormal Cozy Mystery (A Witch in the Woods Book 1)
by Jenna St. James

A 40-year-old Witch with a New Career

And an Enchanted Island Full of Secrets

Career-driven witch, Shayla Loci, is about to turn forty and is ready for a change. When she retires from capturing criminal supernaturals for the government, she figures her days of chasing bad guys are over. Little did she know her new job as the game warden on Enchanted Island would thrust her right back into harm’s way… and she wasn’t even officially on the clock yet! But when Sheriff Stone enlists her help to find out who killed an island resident, Shayla readily agrees. Between sorting through alibis, gathering clues, and mentoring a wayward teenager on how to be a witch… Shayla’s life is hectic. If only her estranged dad–the King–wouldn’t insist she take her bodyguard, Needles, with her everywhere she goes. Just when Shayla believes she’s identified the killer, a new threat emerges… leaving her to make a snap decision that may cost her her life. This new paranormal cozy series with a twist on midlife discovery will leave you guessing and hungry for more! 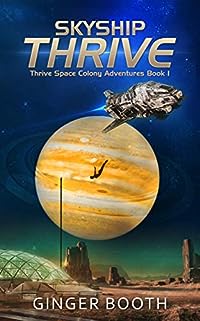 Mahina’s terraformers built a high-tech urban paradise. Then Earth flooded the colony with desperate refugees, cop Sass Collier among them.

The settlers who arrived with Sass died decades ago. Outside the citadel, their descendants die weak and young.

Sass fought a rebellion against the city once. She won concessions to give the settlers a chance at health. She paid with 20 years in prison.

Now she’s out, a reformed character. She assembles an oddball crew doing odd jobs. She intends to mind her own business – how to make a profit on the skyship Thrive.

But her fellow settlers are still failing.

While her business model careens toward circus acts, Sass dares to defy the city again, to solve Mahina’s failure to thrive.

Hard-hitting veteran reporter Deuce Mora is awakened in the pre-dawn hours and called to the scene of a gruesome hanging to identify the body of a dear friend, an FBI agent on the verge of taking down one of Chicago’s biggest Mob operations. Deuce knows it’s murder, but the authorities have no choice but to call it a suicide – the death scene was triple-locked from the inside.

And with that, author Heller, a former journalist and frequent Pulitzer nominee, takes her place with Agatha Christie, Arthur Conan Doyle, and the great Edgar Allan Poe himself as one of the few authors ever to pull off a locked-room murder. In this one, half the fun is trying to figure out the locked-room puzzle. And the delight of finding one in a contemporary mob mystery.

The other half of course, is the tenacious Deuce herself, the tough, hard-boiled, and ever-human reporter who goes places the cops don’t even know about. And Heller’s intricate, action-packed mystery story.

The ill wind sweeping the Windy City has also whipped up two more unexplainable deaths – of perfectly healthy, able-bodied young mobsters,key witnesses about to flip on the top leaders of the Mob operation. Neither the Chicago police nor the FBI can come up with a cause of death – and they’ve looked at every kind of toxin – but our meticulous investigator, whose stock-in-trade is death-defying leaps of logic, fits together a couple of impossible puzzle pieces. The downside is that the bad guys figure out where their greatest exposure lies – and Deuce quickly becomes their new target.

Enter a Washington reporter who has been following the organized crime investigation for months at its source, in D.C. He and Deuce share a dark secret and he knows exactly where to apply pressure on her demons to keep her on the trail of her friend’s murderers. But as the Windy City begins to look more and more like the Chicago of Al Capone days, with bodies turning up in the river and shoot-outs in public places, Deuce discovers she couldn’t walk away even if she wanted to. Whoever is at the top – and this is Chicago, so the top is always way up – will stop at nothing to shut down this investigation. 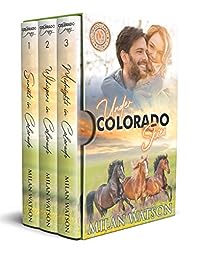 Dreaming of handsome cowboys, small-town romance, and falling in love on a Rocky Mountain ranch?
Welcome to White Horse Creek!
Lose your heart in Colorado as bold, independent women with country roots, find their happily ever after with their rugged men of the west.

Three stories. Three unique romances. All in one box set at a great value!

Sunsets in Colorado
Lewis fled from her country roots, but now she’s back. If it’s up to the handsome cowboy, she won’t ever leave again. Enjoy a whirlwind romance as Lewis deals with the demons of her past.

Whispers in Colorado
Jasmine is a New York designer, but being back in White Horse Creek brings back all the memories she wants to forget. Will this ice queen drop her armor of frost long enough to let in the handsome vet?

Midnights in Colorado
Lisa is bold and vivacious. Sam is a straight-laced traditional cowboy. What happens when they fall in love? Can this hairdresser steal her cowboy’s heart and keep it? 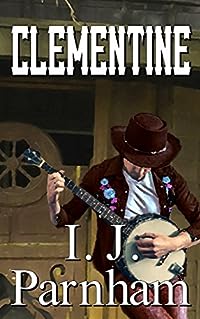 Clementine
by I. J. Parnham

When Fergal O’Brien sells a bottle of his universal remedy to the dying Leland Crawford, Leland makes a miraculous recovery, for several minutes. Then he drops dead. But before the end Leland bequeaths to Fergal his beloved Clementine, a 250-foot sidewheeler that once ruled the Big Muddy, until it sank.

Worse, Leland was in debt and now the creditors expect Fergal to pay up. With Fergal having no money, minstrel Dayton Hyde offers him a way out, but only if he kills Marshal Swift. To avoid carrying out this unwelcome task, Fergal will need to use all his cunning or like as not in this wet weather, he’ll share the fate of Clementine.