If you enjoy enemies to lovers tales with a hint of intrigue, a dash of humor, and emotionally gripping romance then you’ll adore USA Today bestselling author Collette Cameron’s riveting CASTLE BRIDES SERIES. Grab your copy today for swoon-worthy tales that will keep you up past your bedtime! 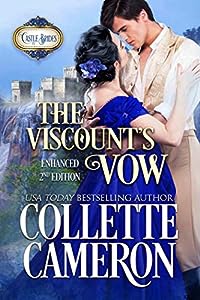 He intended to ruin her… instead, he fell in love.

Ian’s a vengeful lord.
Notorious for his stern demeanor and inflexible honor, he journeys to London for one purpose — the permanent and irreversible downfall of the siren who caused his brother’s death.

Instead of an immoral seductress, he discovers a soft-spoken, raven-haired beauty. Against all reason, he finds himself irresistibly drawn to the last woman in England he could ever love.

Evangeline’s a spirited gypsy lady.
She endures the bon ton’s disdain and numerous indecent propositions with grace and poise. But when a dastardly lord plots her ruination, she’s finished with propriety and politeness.

To make matters worse, he becomes caught in his own snare, forcing them into a marriage neither wants… or do they?

Though this book can be read as a stand-alone, most readers prefer to read the series in order. 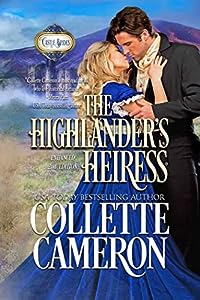 She’s a strong-willed heiress. He’s a powerful lord with a secret. Tempers and passion collide.

Yvette Stapleton has no need for a husband. Ever. Possessed of a fortune, she’s determined to forge her own future without matrimony’s confining bonds. Besides, she’s yet to meet a man who doesn’t find her wealth more alluring than her. Until she meets Ewan, the Viscount Sethwick, that is.

Ewan, also Laird McTavish of Craiglocky Keep, has one last mission before resigning his position as a covert agent: to oust a War Office traitor. He’ll stop at nothing to succeed. Except exploit Yvette, the vixen who captured his interest months ago.

As peril mounts, they flee to Scotland, the only place Ewan is confident he can keep Yvette safe. However, on the journey, dangerous circumstances force them into assuming the role of a married couple. Incensed upon discovering the marriage is legal under Scottish law, Yvette is determined to have the union annulled. But Ewan’s just as resolute she’ll remain his wife…

How can she love the man responsible for her husband’s death?

A lonely widow far from home…
When Frenchwoman Giselle McTavish married a Scotsman, she never expected to be widowed and left to bring up their son alone. Nonetheless, she’s determined the next laird will be raised in Scotland. Even though Highlander Hugh Ferguson — the man she holds responsible for her death — also lives at Craiglocky Keep. As time passes, she struggles to overcome loneliness and homesickness as well as fight the warm feelings Hugh now stirs.

A warrior consumed with guilt…
Hugh has loved Giselle almost from the moment he laid eyes on her. But as the wife — then widow — of his dearest friend, she’s forbidden fruit. He refuses to act on his feelings for her, especially since she’s never shown any romantic interest in him. But that changes one providential Valentine’s Day when he risks everything by using Scottish folklore and legend to at last proclaim his love… 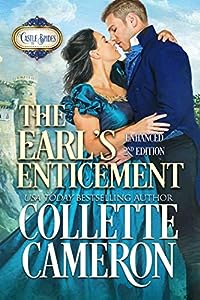 Even the best laid plans can fall apart when opposites attract…

Adaira Ferguson made a mistake. In her defense, it was an honest mistake. After all, how was she to know that the dangerously attractive man she imprisoned was an earl and not a spy? Her good intentions don’t mean anything to him, though. He’s out for revenge. And if he has his way, she’ll become the thing she hates most — a prim, proper, and boring lass. But if he thinks she’s going to give in without a fight, he’s got another thing coming…

Roark, the Earl of Clarendon, values control and propriety above all else. Matters of the heart are of no interest to him. His ill-fated marriage rid him of any romantic notions he’d ever had. So taking his vengeance on the free-spirited Scottish hoyden who falsely imprisoned him will be simple. The unwanted feelings she stirs him? Well… those are infinitely more complicated.

Caught between revenge and the dictates of proper society, can Adaira and Roark find the happily ever after they never knew they wanted? Or are they destined to remain at odds forever?