Yikes! I Didn’t See That Coming!

He growled at me this morning, and even lunged for my face while I was reaching for the milk. I had to put him down. It was the only reasonable thing to do. I had to think of the safety of my family. So… with a show of hands… Who here still had leftovers in the fridge from Thanksgiving? Yes, it was the leftover mashed potatoes that finally turned on me. He was hanging out by the milk. I knew he was about to turn on me a few days ago, but I still procrastinated about getting rid of him, and it almost cost me my beautiful face. Let this be a message to those of us who still have Thanksgiving leftovers in their fridge… GET OUT OF THE HOUSE!!!!!

The Deep End
by Julie Mulhern

Swimming into the lifeless body of her husband’s mistress tends to ruin a woman’s day, but becoming a murder suspect can ruin her whole life.

It’s 1974 and Ellison Russell’s life revolves around her daughter and her art. She’s long since stopped caring about her cheating husband, Henry, and the women with whom he entertains himself. That is, until she becomes a suspect in Madeline Harper’s death.

The murder forces Ellison to confront her husband’s proclivities and his crimes — kinky sex, petty cruelties and blackmail. As the body count approaches par on the seventh hole, Ellison knows she has to catch a killer. But with an interfering mother, an adoring father, a teenage daughter, and a cadre of well-meaning friends demanding her attention, can Ellison find the killer before he finds her? 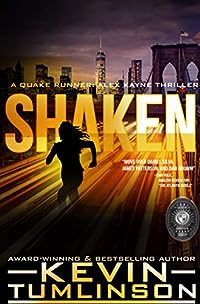 Alex Kayne wanted to make the world a better, safer place for everyone — now she’s on the run.

A fugitive, wanted for murder and epsionage, Alex survives through skill, training, and a little luck. And with the help of her invention: the Quantum Integrated Encryption Key.
QuIEK — pronounced “Quake” — is the ultimate digital skeleton key. With it, Alex can bypass any security system, access any file, and open any door. Which is why world governments and agencies are determined to take it from her.

But Alex Kayne has a purpose…

She helps the helpless. And this time, she’s helping a young woman whose cutting-edge prosthetic arm has been stolen.
The case has grown cold. The FBI don’t consider it a priority. Alex Kayne does.
Risking everything, Alex races to recover the prosthetic arm, before she finds herself locked in the deepest hole the US law enforcmeent alphabet agencies can find.
She may never clear her name. But she will help the hopeless and disenfranchised.

Kyle Austen Reed had it all, and his devilishly handsome good looks were known to steal hearts on and off the screen…

Aurora Rose’s life wasn’t a Lifetime movie. For the courageous and beautiful single mother, this was her reality…

When a meet and greet with an adoring young fan changes both of their worlds, Kyle will have to prove that there’s more to him than meets the eye, and Aurora will need to have faith that, after years of just scraping by, she is deserving of more than just a temporary reprieve from her daily struggle…

For the movie star and the single mom, will a Christmas Wish become their new reality?

*Can be read as a standalone. No cliffhanger* 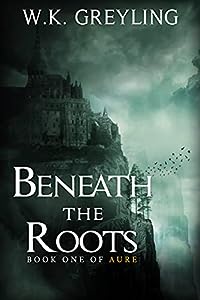 Beneath the Roots: The Aure Series, Book 1
by W.K. Greyling

The isle of Aure is an odd place. Half is buried under a perilous “cursed wood,” the other half is speckled with the ancient remains of a lost civilization. Aure’s newest inhabitants have made their homes on top of those ruins. Myths and legends abound. Stories about the fae are widespread, but never taken seriously. Soon, though, everything is about to change…
When twelve-year-old Merisande happens upon a young fae prince, he gives her a summoning stone she can use to call him if she’s ever in need of help.

Nine years later, Merisande is at a crossroads when her younger brother releases a bull from its pen and it damages the neighboring lord’s flock. The lord offers to set aside the damages if she’ll marry his son, a knight named Sir Avry.

Despite Avry’s deep love for Merisande, she despises him. Years ago, he helped give her brother a severe beating. The memory of that violence has stayed with her, and she decides it’s best to flee. Using the stone, she summons Gandel and begs him to take her through the cursed wood to his land, Thorsault.

But the fae kingdom turns out to be a dreadful place. The only humans living there are mute, sickly slaves who labor all day for their fae masters. Though Merisande is under the protection of Prince Gandel, she does not feel safe.

Then, by chance, she encounters Sir Avry, who has followed her into the kingdom. Avry had nothing to do with the letter his father sent and refuses to marry a woman against her will. Merisande realizes that she may have prejudged him. But this problem is greatly overshadowed by much bigger ones: Gandel is unable persuade his father to free Avry, and the slaves are dying from a terrible plague. With no one to replace them, the fae king prepares to harvest more, and his target is none other than Merisande and Avry’s own people. Can they escape and warn their country before the unimaginable happens? 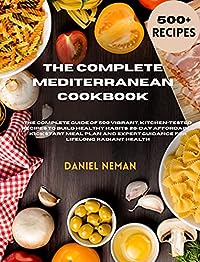 Figure out how to eat well, and live well, with this genuine fledgling’s manual for the Mediterranean eating regimen

Prestigious for its medical advantages, the Mediterranean eating regimen advances a social custom that spotlights on new, regular elements for each supper. The illness battling cancer prevention agents and omega-3s found in the supplement rich food varieties key to the eating routine assistance advance:

The Mediterranean Diet for Beginners slides you into new dietary patterns with an outline of the Mediterranean eating regimen and way of life, 40 starting plans, and an example 7-day supper plan: from a morning meal of fresh, invigorating melon and berries in a Summer Day Fruit Salad to the smoky piece and tart richness of Dilly Baked Salmon for supper with delicately sweet Homemade Biscotti to complete — and that is only a solitary day!

Other eating routine cookbooks overpower amateurs with an excess of data and such a large number of plans. The Mediterranean Diet for Beginners is the ideal blend of understanding and plans to begin your excursion to better living.