If you like space opera, fast-paced adventure, music-based magic, and complex, diverse characters, then you’ll love this collection of stories from William C. Tracy’s Dissolutionverse. Pick up Tales of the Dissolutionverse to discover the music today!

Music and magic. Steampunky science. The Dissolution is coming.

But anxiety and reclusion bring up memories he doesn’t want. Just as Sam gathers courage to send in his application for college away from home, the temperature drops and the sun goes dim. Ice forms in August, and a portal opens in his fireplace. This time, Sam can’t run.

This time he’s sucked in.

Now Sam must survive in the flourishing capital of ten alien species, home to thousands who can change the Symphony underlying the universe and alter reality. Sam’s anxiety attacks and fear of crowds transforms the Nether into a frightening, expansive city. To find his home again, Sam must learn to control the music inside him, while devastating voids threaten to destroy the Nether and everyone he has grown to love.

The Dissolution Cycle (Epic Space Opera, LGBT):
Book 1: The Seeds of Dissolution
Book 2: Facets of the Nether
Book 3: Fall of the Imperium

Market: YA and New Adult 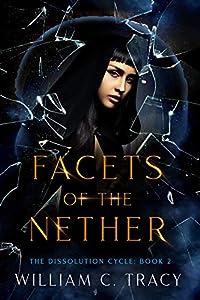 The Dissolution approaches, and all will change.

Sam has saved the Assembly of Species, but at a terrible cost. Locked in his apartment, his memories gone and his best friend abducted, he is once again crippled with anxiety. Meanwhile, Enos struggles to free her brother from imprisonment, alone for the first time in her life. Her true species has been revealed, and there are hints the deadliest of her kind survived an ancient war.

But the Nether contains more secrets. A musical chime disrupts daily life, signaling changes to its very fabric. To solve this mystery, Sam must face his anxiety and confront truths about his memories and unique abilities. Only then can he save his friends from the machinations of the Life Coalition, by understanding the reality behind the Facets of the Nether.

The Dissolution is here. It is both an end, and a beginning.

The Dissolution has begun.

Sam is finally reunited with Enos and Inas, only to see his new home under siege by beings that dissolve reality at a single touch. Even as they battle their personal demons, the three apprentices must also fight to save their home. Enos lashes out at those she loves, plagued by voices she’s consumed, and Inas must risk his sanity to access ancient memories of the Nether. Sam must learn how he uniquely affects the Symphony, but there is little time to master what usually takes a lifetime.

The Nether is leaderless and the Assembly is in chaos. The three apprentices must counter an invasion by aliens who rip the Symphony, and the very universe, apart. Ancient antagonists will resurface, a battle must be fought, and the secrets of the Nether and the universe will be laid bare in this final book of the Dissolution Cycle.

Join Origon as he investigates the Pixie homeworld and tries to avert a war!
Learn how to change the Symphony with Rilan, as she searches for Origon’s lost brother.
Travel with merchants in an old war train with some suspicious cargo.
Fly with the first majus in space!
Discover the food and culture of the ten species.
Learn what lurks in the basement of the House of Potential.
Music, magic, and murder is afoot with Mandamon, as someone plots to bring down the secret Society of Two Houses!
An ancient being confronts other-dimensional entities.
And a climbing crew searches for the top of a miles-high wall, riding a giant steampunk beetle!