A city ruled by Gods, a mortal champion, a misfit girl and a disobedient dragon… The Blade Trilogy boxset by Christopher Mitchell is brilliantly written with thoughtful characters and incredible action. Grab your copy of this amazing trilogy today! 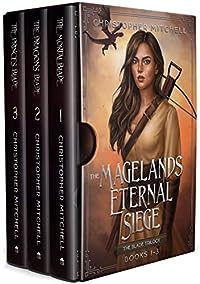 The Mortal Blade
The Dragon’s Blade
The Prince’s Blade

The three books of the Blade Trilogy have over 1500 five star reviews between them and The Mortal Blade was ranked as a #1 Best Seller in the Epic Fantasy and Sword & Sorcery categories in the UK store.

Stolen from his home, Corthie Holdfast has arrived in the City of the Eternal Siege as a new Champion.

He must fight alongside the Blades, whose lives are dedicated to the defence of the City against the hordes of monstrous Greenhides; or die at the hands of the Gods who rule.

Maddie Jackdaw, a young Blade, faces her last chance. Thrown out of every unit defending the City, either she takes on a new role, or she will be sent to the Rats, a company of misfits given the perilous tasks beyond the Great Walls.

Her new role, if she takes it, will bring her face to face with her deepest fears, for beneath the walls, in a secret and hidden lair, lies a dragon, imprisoned and waiting…