No Time For Mariah

I haven’t heard it yet, but I am sure it is there. It’s only November third and I am just about done with my Christmas shopping. I am going nuts having to wait to put out my light-up reindeer in the front yard. I will probably do that on Saturday. I love the holiday season… A LOT! But I can’t stand Christmas music before December first. Strange that I feel that way. I might bend a bit and tolerate it the day after Thanksgiving, but not before. If I hear one note of Mariah Carey’s “All I Want For Christmas” before Thanksgiving I will lose my mind. Speaking of… I haven’t seen any of downtown turkeys wandering around the streets. Strange. I’m sure they are fine. Ya… they just found a nice place to hang out. I will see them soon. Sure .. ya. 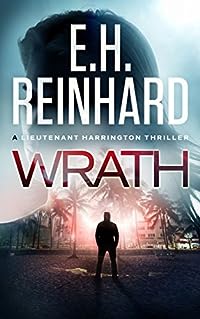 He’d killed before. Infidelity made him kill again. Now taking the lives of all the women who’ve wronged him is his only focus.

In this tightly plotted thriller, homicide lieutenant Nash Harrington realizes one horrific crime of passion is the beginning of a spree. A misogynistic killer is targeting every woman he believes has wronged him… including one who Harrington loves.

Wrath is the first novel in the can’t-miss, read-all-night, Lieutenant Harrington Series. Believable plots (and that’s what’s troubling) set the stage for some dark and gritty cop vs. killer action in the streets of Miami. Join Nash and his team as they pursue justice for the innocent and go head to head with some of the most ruthless and homicidal adversaries imaginable. 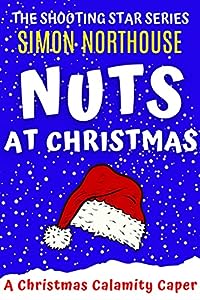 A Modern Day Christmas Carol!
It’s Christmas Eve and Will Harding is handed one job to do by his wife… get a Christmas tree! It’s a simple enough task for any normal person. When he takes his three best friends along for the ride, Geordie, Robbo and Flaky… then nothing is simple… and no one is normal.
This Christmas it’s different at the Harding house. They’ve invited their best friends and children to enjoy the festivities at their home in the heart of the Yorkshire Dales — at least, Will’s wife has. Will is not entirely confident he can survive a week in close proximity to his dysfunctional friends. His wife has been asking him for days to buy a Christmas tree, but he insists a tree should only be brought into the house on the day before Christmas.
As Christmas Eve arrives, it’s time for him to get a tree.

He sets off with good intent, with his best pals to lend a helping hand. However, heavy snowfall, the lure of English country pubs, and a disgruntled Lord of the Manor throw a massive spanner in the works. Add to that, Geordie’s propensity for stupidity, Robbo’s fondness for wacky?baccy, and Flaky’s insufferable lecturing — well… what could possibly go wrong?

Five adorable, innocent little children await their tree. Will it be delivered? And do they even care? The kids have one thing on their mind – Santa! However, the Santa which appears in the garden later that night is not the one they were expecting.

Can Will and his pals save Christmas from becoming another disaster, or will it turn into a bleak mid-winter? 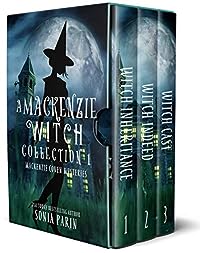 Fun paranormal mysteries introducing Lexie, a reluctant witch in training, and a host of support characters who make her life… interesting.

Witch Inheritance: Lexie’s heritage has caught up with her. It’s time to face her obligations to the coven and take on a job she didn’t even apply for, one which leads her straight to danger where she tackles a deadly fog and a new penchant for sipping champagne and wearing haute couture.

Witch Indeed: Mackenzie Coven rule number one. Do not lose your cat. Lexie has been asked to attend a prestigious feline extravaganza at Chelsea Manor. The task is simple enough. Represent the coven, get herself and Luna, the cat which has as yet to decide if she’ll stay with her or not, there in one piece, meaning… no more crash-landing or leaving bits and pieces of Luna behind. Lexie figures the rest will be simple enough until she realizes she’s crash landed in a room with a dead man in it – a man who’d had a fascination for stuffed cats. There are only a handful of guests attending this exclusive feline soiree and they all have their eyes on Luna, but one of them also has blood on their hands. If they killed once, they’ll kill again.

Witch Cast: Fool her once… fool her twice… This will be the third time… Lexie can’t believe she’s been roped into performing her coven duty. Literally. She’ll be on the stage, the one place she’s been avoiding all her life. If her abysmal acting skills don’t get her killed, surely mentioning the name Macbeth inside the revamped Garland Theater will. 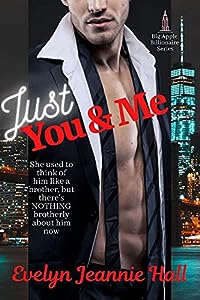 “You were like a brother to me, Benji,” she told him, pushing against his chest which had somehow over the years become a solid brick wall.

“Let’s get one thing straight, Kat. I was NEVER your brother. Not ever.”

Benji regrets abandoning the woman he always secretly loved, even if there were extenuating circumstances. Now he seeks to reconnect with her before it’s too late.

When Katrina’s best friend left their tiny hometown for NYC, she had no idea why he cut her out of his life. The thing she fears most is that it’s all her fault and fixing things seems impossible.

Will they attempt to trust one another again and learn from their past mistakes, or has their nine years apart ruined any chance at happiness?

WARNING: this story contains a nerdy guy turned hot billionaire, siblings with zero filters, foul language, and sexy times that may or may not include a fake bow and arrow. 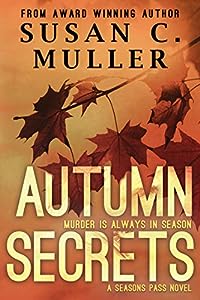 A killer reaps a bloody harvest. To solve the case, one detective must confront a madman… and his own demons…

Noah Daugherty is haunted by his painful past. The detective’s dark, cynical mind helps make him a skilled detective. When Noah investigates a recently uncovered body, he calls in the corpse-sniffing dogs on a hunch. He never expected to dig up a killing field populated with multiple murder victims from the last decade…

With few clues to go on, Noah calls in a favor from a friend, placing her directly in the killer’s clutches. Now he must race to track down a madman with a sinister agenda. But before the bloody end, Noah will need to face down his own demons… or risk being buried himself…

Autumn Secrets is the fourth standalone mystery novel in the Seasons Pass series of police procedurals. If you like terrifying villains, haunted heroes, and a dash of romance, then you’ll love Susan C. Muller’s seasonal mystery.