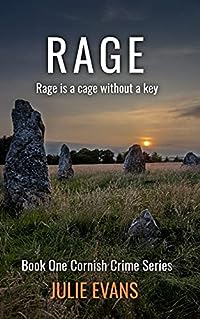 RAGE: CORNISH CRIME SERIES BOOK ONE: Rage is a cage without a key
by Julie Evans

The first in a series of tense page-turning Crime Thrillers set in Cornwall : Cornish Crime Series Book One

‘Rage is a cage without a key’

What happens when their paths cross and history catches up with them?
Can they escape the cages they have built?

She believes in fair play and operating within the rules but when told by her consultant, the cancer she thought she’d beaten is terminal, she descends into a dark and alien place at odds with her character. Compelled to right wrongs and punish those who have caused harm and avoided justice she seeks to take back ownership of what little life she has left.

She does not know there is someone from her past, far more dangerous than her, who calls the shots. Issy Moran, Claire’s consultant; a bitter, deranged, narcissist, has for years routinely ended the lives of those patients she judges unworthy of treatment.

From childhood she has harboured a grudge against Claire and when by chance, they meet she seizes the opportunity to satisfy her twisted desire to first befriend her and then destroy her. 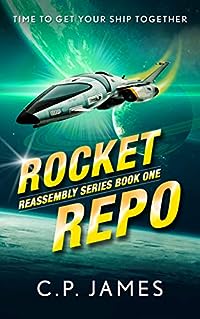 Years ago, former henchman Geddy Starheart inhaled an ancient alien named Eli who’s lived rent-free in his head ever since. Together, they built the only ship capable of bringing Eli home. But on the eve of their departure, it disappears. Their quest to find it exposes a conspiracy to destroy all intelligent life in the universe, which technically includes them.

Geddy never needed anything or anyone but a custom-made blaster and a couple fingers of Old Earth whisky at the end of a long day. But since his own screw-up forced the evacuation of Earth 2, he’s only had Eli for company. A daring escape off-planet lands him aboard a creaky salvage trawler with a can-do crew and the galaxy’s worst business model.

But stalwart friends are better than any weapon. With the help of Eli, his oddball crew, and their trusty trawler, Geddy must traverse the cosmos in order to track down his ship and save the universe. Each thrilling, hilarious new adventure brings them closer to the truth but ever farther from decent food.

Even though Gloria is determined to change her reputation, most of the women in town still think she’s a tramp. Sure, she may have dressed a little flashy and dated pretty much every single guy in town, but that’s the past. Now that she wants to make a fresh start, will Smithville give her a second chance?

Ned has heard all the gossip, but being the Sheriff’s Deputy, he sees all the kind things Gloria does behind the scenes for the folks of Smithville. It looks like the upcoming Christmas Pageant will offer him the opportunity to spend time with her, but can he overcome a frustrating stutter and talk to her, face to face?

Your favorite characters from the Hometown Series bring craziness, love, and Smithville Christmas style, to a whole new Holiday romance about overcoming your past and sharing your deepest secrets. Fall in love and be swept away with the Christmas Eve celebration of your dreams.

A Wild Journey for Payback: A Historical Western Adventure Book
by Ethan Westfield

Smith is a mysterious man that does not go unnoticed. Having no interest in gold or fame, he had his fill of adventure before arriving in the untamed backdrop of the wild frontier. When he first set foot in Bozeman, Montana, trouble was the last thing he expected to find, but after the sudden attack of three notorious felons wanted by the law, he figured out that his stay there would not be a child’s play, as he wished. As if that weren’t enough, running low on bullets and cash will soon throw him on the mercy of a ruthless rancher, who has nearly complete control of the town. Will Smith finally take the risk to accept a tempting job offer from the vicious man?

Rumors about Smith spread in town like wildfire, but little did he know that this crime was only the beginning of his perilous adventure. While riding on a rainy day, he rescues a helpless woman, trapped in a criminal’s dirty hands. Smith will soon find out that she is Josephine Compton, the daughter of a powerful cattle baron, and he will take it upon himself to return her to the ranch. How will their unexpected encounter change their lives once and for all?

Even though Josephine and Smith meet under the worst variety of circumstances, the attraction between them is impossible to deny. However, their love cannot flourish, as Smith’s temporary stay in Bozeman will soon turn into a bloody undertaking without end. Will he manage to choose the right side and fight for good against evil? Or will they both be doomed to a dreadful fate?

All Liv Kolgrim wanted for her forty-first birthday was a nice dinner with her husband. What she got was divorce papers and the legs knocked out from under her very comfortable life.

Yearning for a fresh start, Liv punches the reset button on her life and retreats to her tiny hometown to plan her next move.

But her feet have barely touched Mistlevale’s snowy streets when a body shows up at her family’s cozy lodge. Even worse, local sheriff’s deputy Gray Bauer wants Liv’s cantankerous grandmother on the hook for the crime.

Now Liv’s restful vacation has turned into a race to unravel the mystery before her poor Gran winds up in a cell. With a small-town cast of characters to investigate, delicious cocoa to drink, and an enormous semi-feral cat on her tail, Liv has more than her hands full.

And that’s all before her family insists she take up the mantle of witchcraft that Liv’s never really believed in.

Cocoa & Curses is the first book of the Witches of Noel Lodge, a paranormal women’s fiction series featuring a trio of snarky witches, a heaping helping of holiday cheer, and enough magical mayhem to stuff a stocking.

Please note this book was originally published as Room With a Bloom. This new edition does not contain additional content.