Start a dangerous adventure with Carrie O’Connor — an elite covert operative of the mysterious CIS — who isn’t burdened by bureaucrats or worried about rule books. With hundreds of five-star reviews and thousands of sales and downloads. Each book is a clean, self-contained story without cliffhangers and can be enjoyed on its own. This heart-pounding spy thriller series guarantees to satisfy, with well-crafted characters, captivating storylines, and pulse-pounding plots. Enjoy! 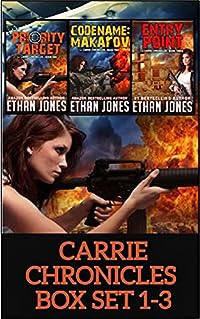 She didn’t start the fight, but she’ll gladly finish it…

While confirming the elimination of a target during a drone attack, Carrie discovers a massive cover-up. Now a target herself, she’s determined to find out who wants her dead and begins to cut through a complex web of lies and deceit. Even if it means going to war with the CIA. With innocents killed and her own life at stake, how will Carrie survive so that justice is served?

She’ll stop at nothing…

Carrie, the fiercest CIS field operative, is in Pakistan for an extremely secretive meeting with one of the local Taliban leaders, when she falls into a suspicious ambush that almost claims her life and suspects a mole inside her own team.

As she starts her search for the traitor, Carrie learns of a ruthless ex-KGB assassin, who may have been implicated in her father’s disappearance in Moscow at the height of the Cold War. When she dives into this inquiry, she soon finds herself at the center of a decade-long intrigue. While trying to balance her feelings and rein in her emotions, Carrie is informed of her ex-partner, Justin Hall, who has gone rogue in the lawless terrorist-infested badlands of Syria and Iraq.

Carrie is determined to dispel the uncertainty about her father’s disappearance and eager to bring Justin, the former love of her life, back home. Alone, she starts her most personal and dangerous mission. Can she settle accounts once for all with the man who killed her father, and the traitor who betrayed her?

Why would a Taliban commander ask for her?
Elite operative Carrie O’Connor survived Afghanistan twice and swore she would never go back. Then, a known terrorist mastermind attacks a police station and shockingly turns his gun on his own men. When the smoke clears, he surrenders, but will only speak with Carrie…

Soon after arriving, as Carrie tries to uncover his motive, she discovers a treacherous conspiracy involving the Taliban and the Russians to assassinate the US president. But a cloud of doubt remains: Is the president really the terrorists’ target? Or is he simply a diversion for something more sinister?

They’ve crossed the line…
Carrie O’Connor, elite CIS operative, while rescuing two hostages in the Central African Republic, suffers the loss of a loyal local ally. Carrie understands the severity of the situation only later, when she discovers his daughter is kidnapped, along with a group of young school children.

Carrie and her partner anxiously take on an even deadlier mission: rescue the children before it’s too late. As Carrie suspects the terrorists have the backing of a corrupt, high-ranking politician who will stop at nothing to hold on to power, she fears the worst.

They’ll have to pay…

Can Carrie change her strategy at the eleventh hour to ensure no child is lost and outplay the terrorists so that they get what they deserve?

Find out in Unknown Operative, Carrie’s latest adrenaline-filled spy thriller. Buckle in for a long, white-knuckle ride until the very last page.