The starship Freedom was once a mighty warship. Today she’s a tourist attraction.

The space wars ended long ago. The Freedom is now a flying museum. The tourists love it. The Changing of the Guard, the starfighter aerobatics, the starboard cannon salute… it’s the best show in the galaxy.

Then, on Christmas day, the aliens attack. 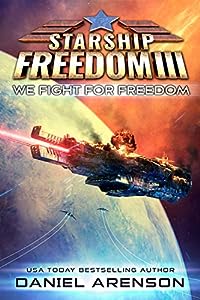 There can be no victory without sacrifice. No courage without fear. No freedom without heroes to defend it. This is a time for heroes. A time for war. A time for the starship Freedom to light the darkness.