Casino meets Pretty Woman. The Mafia Madame series is a non-stop thrill ride following the intense and colorful life of Cyn Spagnoli. Casino revealed the behind-the-scenes workings of the Mafia’s skim of the Vegas casinos in the 80s. Mafia Madame does the same for the Vegas sex industry. If you’re looking for a feel-good, cozy bedtime story, Mafia Madame probably won’t be the series for you. But if you’re looking for an exhilarating whirlwind of a tale that will raise your pulse at every corner, you’re in the right place.

In booze, gambling, and sex fueled 1980s Vegas, an unlikely Mafia kingpin was just making her way on to the scene – 18 year old Cyn Hardy.

Mafia Madame pulls the curtain back on the Las Vegas sex industry, the same way Casino revealed the inner workings of the gambling industry.

“Mafia Madame is a well-crafted story which will have you burning the midnight oil as you keep turning the pages to find out what happens next.” – R.J. Krzak, Award Winning Author

1984 – Las Vegas, Nevada. Infamous Mob Boss, Tony Spilotro’s reign in Vegas is ended by an assassination, leaving a power vacuum in his wake.
Sin City is up for grabs and Chicago, Detroit and New York families are locked in a territorial struggle to stake their claim in the Gold Rush that is Eighties Vegas.
Enter Cyn, a wide-eyed, 18 year old, small town Michigan girl. After moving to Vegas and falling in love with the son of a Chicago Mob Boss, she finds herself entangled in the shadowy world of organized crime and the barely-legal sex industry.
It’s up to her to defeat her New York Mafia business rival, or risk losing everyone who has ever meant anything to her. Her series of dangerous and bold choices lead to a rich and surprising odyssey of love, family and loyalty. 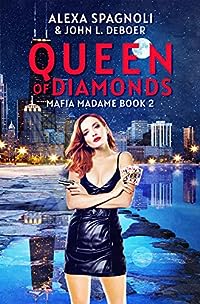 2004 – Chicago gangster Nick Nicoletti was dying of heart failure. Who could he trust to help him keep control of his criminal enterprises before it was too late? Who had the cold-blooded killer instinct and cunning required to do what his businesses required and would accept the mantle he had to bestow when his time came? No man in Chicago could fill his shoes, as far as he was concerned. But he knew a woman who could. It had been twenty years since Cyn Hardy breezed into Las Vegas from small-town Michigan, a wide-eyed eighteen-year-old innocent looking for excitement in her life. During that time she married the son of mobster Joe Spagnoli, became the owner of the largest call-girl service in Sin City, and survived the murders of her husband, then her father-in-law, and finally her twenty-year-old son. As she was immersed in grief, her father-in-law’s closest friend, Nick, sent for her. Cyn had something no one in Chicago had – Nick’s complete trust. And she owed Nick big time. So Cyn Spagnoli was back in the Mafia again, learning Nick’s gambling and loan-sharking businesses and his specialty – assassination, tapped to become his successor.