This Time Next Year

I might be a bit over my head right now with the Monarch Caterpillars. The two plants hubby bought with the caterpillar eggs had three more eggs than I thought. Currently I have six caterpillars that are eating me out of house and home. There is a possible seventh little guy, but I can’t seem to find him right now. I am sure he is in there somewhere. The book, The Very Hungry Caterpillar, was not an exaggeration. Those little fat grubs can eat… and eat, and eat, and eat! I need to go back to the nursery and get more milkweed. I most likely need about three or four more plants, which also means the possibility of more caterpillars. This is a vicious circle. If I do this again next year, it will be a lot easier since I will have plenty of plants and I plan to harvest seeds from this years plants for even more next year. My goal is to have plenty of food in the garden for the Monarchs to return next year, and plenty of Milkweed for them to lay their eggs. Gardening certainly forces one to have a lot of patience. Something that does not come naturally to me. 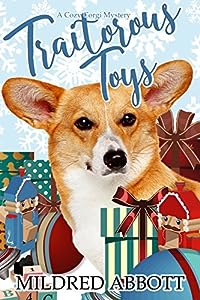 It’s Christmas in Estes Park, Colorado: cozy fires, twinkling lights, soft snowfall, and… murder.
The winter holidays in charming Estes Park lulls Winifred Page and her corgi, Watson, into thoughts of spiced chai and gingerbread as they settle into their new home. Fred’s dream bookshop is becoming a reality, and with Christmas only days away, her only concerns are spending time with family, enforcing Watson’s diet, and finding the perfect gifts.
The toy store beckons Fred and her friend Katie, who dash in out of the cold, during a shopping spree to discover handmade toys, cuddly stuffed animals… and a dying man on the floor.
When Katie’s desperate attempts to save the man ends in her being taken in for his murder, Fred once again dons her detective hat. She puts aside her Christmas list and — with Watson sniffing around — begins a list of suspects. But as quickly as clues point to one person, new discoveries shift the spotlight to another.
With Katie’s freedom in the balance, Fred has little time to think about gifts or to enjoy the holiday lights and music. A killer is on the loose, one who became violent in a picture-perfect Christmas toy shop, and Fred and Watson can’t begin to predict what might happen next… ?

(This culinary cozy mystery includes a recipe for delectable gingerbread.) 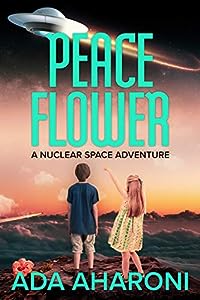 Two teenagers want to save the world and bring peace to our planet.
Lee and Roni, two brave and inspiring teenagers, face the terrible nuclear dragon Nuki, who tries to stop them from bringing the magical peace flower to our earth, which can only be found in Esperia – Hope, the Land of the Future, to our Earth.

At the suggestion of the famous scientist Bayles, they travel our galaxy through the past, present and future, in a magical super-modern high-tech talking vehicle called Muzi, guided by Petra, the smart and resourceful sister of Peter Pan.

Their mission in space, to stop Nuki from destroying the world, and to find the unique flower, is dangerous and urgent. Will they manage to save humanity?

Peace Flower, the highly praised book by author Ada Aharoni, is a fantastic adventure for young and old, and an exciting allegory of our troubled times. It will delight readers with its vivid imagination, humor, and exciting story. Its magic is more exciting and impressive than even that of Harry Potter, and far more meaningful, for it is a powerful realistic allegory symbolic of our own lives and times.

WHEN MAJOR NATHAN HELIX’S commanding officer plunges 55 floors to his death, everybody agrees that Helix is the obvious choice of investigator.

CONFLICT ERUPTS WHEN the Home Secretary intervenes. Helix refuses to stand down and chooses suspension over desk duty. Determined to discover who murdered his friend and mentor, he joins forces with his cyber-genius brother Ethan.

CHAINS OF EVIDENCE point back to a celebrated case, the pinnacle of Helix’s career, a crime centred around politics and power. The case is closed and Helix wants it left that way. But long lost family links lurk in the shadows and blood is thicker than water. He’s not the only one with a different version of the truth.

WHEN HE LEARNS who’s behind the leak and their lust for revenge, Helix knows he’s waging a war on two fronts. Pitted against that and the system he thought he was part of, he has to find Gabrielle. This time, it’s not just a fight for her reputation and his career, but a battle for their lives. 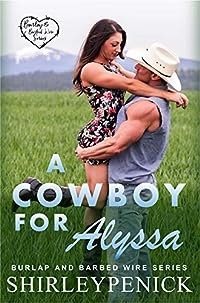 A Cowboy for Alyssa: Burlap and Barbed Wire
by Shirley Penick

Looks can be deceiving, and a cowboy only gets one chance to make a good impression.

Alyssa Jefferson is ready to start her veterinary internship at the Rockin’ K ranch, in the beautiful Colorado Rockies, where she will be assisting with the births of over three hundred pregnant cows. It’s a dream come true, and she’s so excited the joy is oozing from her. As icing on the cake, it appears the brothers that own the ranch are sexy as can be. A few months with some eye candy, is just what the doctor ordered.

Beau Kipling sees the sweet young thing coming for her riding lesson, and feels a kick to his gut. What is this hot young woman doing dating a man old enough to be her father? He’s so ticked off, he can’t stop himself from being an ass to her. He’s never, in his whole life, felt the instant attraction he feels for this female, and she’s some old guys arm candy.

When the truth is revealed, that Alyssa is his intern for the spring, and not the sheriff’s new girlfriend, Beau knows he’s blown it. And he can’t even explain why he was so mean. No woman wants to hear a guy thought she was a gold digger. Now they must work together all spring. Can he convince her to give him a second chance? 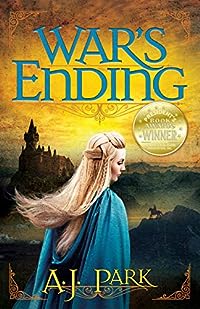 A courageous noblewoman. A mysterious stranger. A war that may destroy them both…

As the king’s niece, Shalyrie can’t wait to explore her kingdom’s colonies with her uncle. But when she’s badly injured in a savage raid and abducted by mysterious masked horsemen, she’s stunned when her captors heal her wounds. As her feelings grow for her captor and his people, a terrifying attempt on her life reveals that her own people are trying to kill her.

Kalleck expects to die fighting a hopeless war like his father before him. While he helps Shalyrie piece together clues behind the assassination attempt, her very presence escalates tension between the kingdom and the colony. With time running out, Kalleck knows he must act quickly to prevent innocent bloodshed.

Can their love put an end to a devastating war?