When Jabba The Hut Moved in

So the battle begins. I am not sure I have the strength for the fight. I think I will give up now and keep my sanity. I just can’t..no (lays down on floor). Hubby wants to rearrange the furniture in two rooms. He doesn’t think he will be returning to the office now that things are opening up, so he needs to set up an office in our home. He has spent the last year or so working from the dining room table, and if working from home is going to be a more permanent thing, he needs an actual desk. He keeps talking about moving TVs, flip flopping rooms, and a new couch. The new couch thing is what got me. The last time he picked out a couch he got a huge puffy brown blob that took over the entire living room. It looks like Jabba The Hut moved in and added a few decorative pillows to his outfit. I am pretty sure I cried when that blob moved in. I am also sure that a village of elves lives behind the blob couch as well. I can’t know for sure. I haven’t seen back there in years. So many years. ew 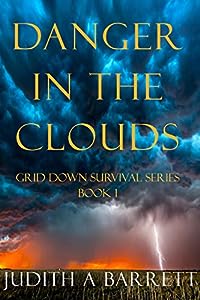 DANGER IN THE CLOUDS: A MAJOR ELLIOTT THRILLER (GRID DOWN SURVIVAL SERIES Book 1)
by Judith A. Barrett

Power grid collapses. He has the key to stop his enemy. His nemesis waits. Major’s life on the farm abruptly changes after a cyberattack causes the collapse of the US power grid and the economy crashes. His autistic granddaughter’s uncanny ability to see danger draws the attention of Major’s nemesis who intends to control the US government. The attacks on the farm fuel Major’s drive to stop the traitor even though others tried and tragically failed. Major does not intend to die. 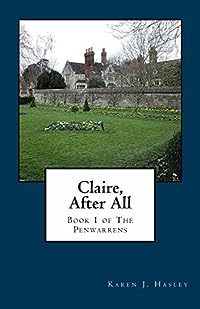 Claire, After All (The Penwarrens Book 1)
by Karen J. Hasley

Claire Penwarren is a force to be reckoned with. Commissioned by her widowed father, she descends on the green Sussex hills with three assignments. Ready Loden Hall for her father’s arrival as the new earl. Find the perfect husband for her gorgeous half-sister. Acquire a tutor for her rapscallion twin brothers. At twenty-eight Claire — now Lady Claire — has had years of experience running an orderly household in India and cannot imagine England will be any different. Older. Wiser. That’s Claire.

But England refuses to cooperate with Claire’s well laid plans. How did beautiful Loden Hall become such a ruin and how will she make it right in time? Why is her usually cooperative sister so resistant to Claire’s recommendation for a husband? Why are her brothers so unhappy that stowing away on a merchant ship holds more appeal than her loving care at home? Really, if it weren’t for the unexpectedly practical advice of her neighbor the Marquis of Symonton, she would feel quite alone.

For Claire, focused on the tangled knots of her own family, Symonton is the perfect ally. Who better to offer guidance than a man savvy enough to maneuver his way through society for six and thirty years without being trapped into matrimony? And how fortunate that the man is entertained by her family’s exploits! But even with Symonton, Claire manages to get it wrong. It’s not her family he’s interested in and amusement is not what he feels. The man has other plans entirely. Maturity and experience are all well and good, but Claire will learn that neither is as valuable as love. 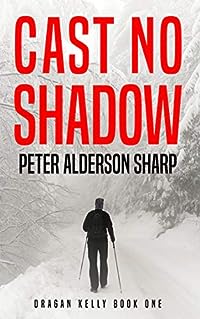 HMS Visigoth has been torpedoed off the coast of German occupied Norway. Sole survivor Lieutenant Dragan Kelly finds himself behind enemy lines, unsure who to trust. The Norwegian resistance share rumours about a mysterious Nazi plant where an Armageddon weapon of terrifying power is under construction.

Should Kelly escape to Russia or stay and investigate it?

And what of the stunningly beautiful but enigmatic resistance fighter Sybilla? Kelly falls in love with her, but is she all she claims to be?

Inexorably, Kelly is drawn into the murky world of espionage making unlikely friends and powerful enemies as he goes, learning bleak secrets and uncovering dark truths.

But all the time he dreams of being reunited with Sybilla.

If Kelly finds her, will he caress her? 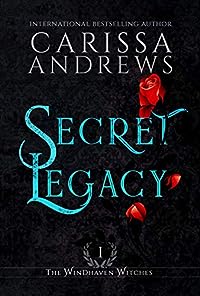 What I didn’t anticipate is that uncovering them would mean dealing with a whole host of “other-worldly” problems.

For starters, I’m pretty sure the house I’m living in is haunted. Either that or I’m losing my mind. Secondly, I’m going to a college for supernaturals with zero ideas on what powers I possess. But someone higher up than me must know something, or I wouldn’t be here. Right?

But here’s the kicker…

Everywhere I go, new secrets are emerging. Like, the fact that I went missing when I was a kid and I don’t remember a thing. And this ancestral home… it has secret rooms… hidden rooms. And yeah, it’s more than just haunted…

*PLEASE BE ADVISED: This is a YA+ academy / witches series. It’s labeled YA(+) for stronger language and some mature situations. As the heroine ages and grows, so does the content of the stories.*

Dancing With The Dead: A Culinary Cozy Mystery With A Delicious Recipe (Return To Milburn Book 2)
by Nancy McGovern

When Nora’s daughter, Grace, and her boyfriend suddenly decide to get married, Nora can’t help but feel torn. On one hand, she is thrilled that her daughter is in love and wants her to be happy. But the groom’s family is more than a little bit crazy, especially his domineering & intrusive mother. Nora doesn’t even want to imagine that woman as her precious daughter’s mother-in-law!

But she may not be around to interfere for long. After all, she’s the main suspect in a murder case and things don’t look good for her…
Did Nora’s new in-law-to-be do it? Or is she as innocent as she claims? And, if she is, can Nora set aside her personal feelings and help find the real murderer?

Find out in Dancing With The Dead!