I think the cats in the neighborhood are plotting against me. More and more often I am finding them gathering for meetings in my front yard. They can be found on top of my plants, rolling around like my yard was some sort of playground. They have even been fighting a bit to claim the yard as their own. THE NERVE! I just about lost it yesterday when I saw one cat giving my two sweet lizards, that live at the top of the dry river bed, hungry eyes. OH NO YOU DON’T!!! I ran out the front door barking like a crazy woman to scare them off. They trotted off disrespectfully to the other side of the street. Rotten teenagers.. I mean cats. Drought or no drought, I’m setting up the motion sensor sprinklers. It’s time to teach those cats a lesson! 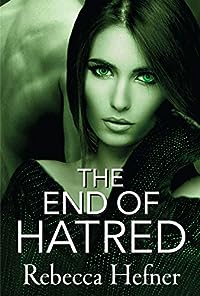 These are dangerous times on Etherya’s Earth…

Slayer Princess Miranda, heir to the throne, has hated the Vampyres for a thousand years. Since the Awakening, she’s fought to protect her people, choosing to be a warrior more than a royal. When a female Vampyre washes up on the shore of her compound’s riverbank, she seizes the opportunity to take the offensive.

Sathan, King of the Vampyres, distraught at his sister’s disappearance and captivity, agrees to travel with Miranda to resect the Blade of Pestilence, also hoping to change his people’s state of endless war. Although the woman hates him due to the constant raids on her compound for the Slayers’ life-giving blood, he can’t help but admire the stubborn and strong princess.

As their journey progresses, both begin to understand that they are aligned in their hatred of Crimeous, leader of the Deamons, as well as their hope for peace between the Slayers and Vampyres. Determined to fight their growing attraction, they forge a tentative truce. But old wounds run deep and trust is scarce. Their faith in each other must remain strong or all will be lost…

**The Etherya’s Earth series is best read in order so the reader can enjoy the evolution of the characters. After all, the author loves a good twist and wants the reader to uncover them organically. However, readers of romance rest assured that each book has its own featured hero/heroine and HEA. 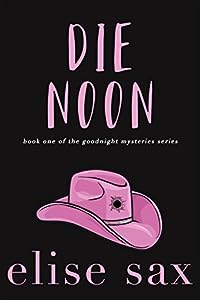 Matilda Dare can’t sleep. Her insomnia is one more reason to move to the quirky small town of Goodnight, New Mexico after she inherits a house, a small newspaper, and two old dogs there. But despite the Goodnight name, Matilda still spends hers wide awake, and she has good reason after a reporter is murdered. With a mystery to solve, she begins to investigate the town and uncovers more suspects than she knows what to do with.

Meanwhile, the hottie cowboy sheriff is doing his own investigation into Matilda, and the mysterious, handsome stranger, who just happens to live with her, is showing up in all the wrong places. As her investigation continues, danger increases, and it might end up spelling lights out for Matilda.

Die Noon is the first installment in the hilarious, romantic Goodnight Mysteries series and a spinoff of the Matchmaker Mysteries. 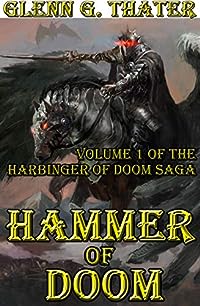 Our greatest heroes fell. Our strongest walls crumbled. The world wept. But one man stood against evil where all others faltered. This is his story.Glenn G. Thater’s Midgaard is a world filled with valiant knights, mysterious sorcerers, complex political intrigues, monsters of myth and legend, and insidious otherworldly evils. But most of all, it’s filled with stories you will always remember and characters you will never forget. 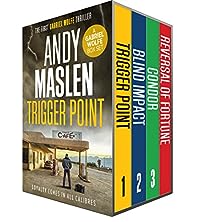 A decorated SAS veteran struggling to overcome his PTSD caused by a botched final mission.

Sucked back into government black ops work, he makes mistakes, sure. And he’s not invincible.

But he’s tough as nails. And he does what he needs to defeat evil. Whatever the cost.

This boxset gives you the first three novels in the series – over 1,000 pages of “lose-sleep” action.

Book 1: Trigger Point: Now re-edited and with a brand-new ending. When a right-wing billionaire stands for Parliament, he enlists the help of ex-SAS soldier, Gabriel Wolfe.

Gabriel left the Army after a covert mission went disastrously wrong and has sworn never to cause another man’s death. It quickly becomes clear that Sir Toby Maitland’s ambitions extend far beyond a seat as an MP.

An ex-contact in Swedish Special Forces now working for MI5 contacts Gabriel, and he realises he has little choice but to try to stop his employer’s juggernaut in its tracks.

Gabriel finds himself embroiled in deals with Hells Angels and a South African arms dealer in the US before the true nature of Sir Toby’s plan is revealed.

Book 2: Blind Impact: When British Special Forces veteran Gabriel Wolfe is involved in a collision with a delivery truck, he lands up in a military hospital, where he discovers that someone is fatally sabotaging top-secret RAF flights using a new performance-enhancing drug.

Now, with two British women snatched by Chechen separatists, and the Farnborough Airshow fast approaching, Gabriel has to rescue the kidnap victims and prevent another pilot’s death.

The mission calls for street-fighting skills, military strategy and a stint undercover as a doorman for Jonny Rocketz, a sleazy bar in Talinn’s red light district.

Gabriel is up for the challenge, but he’s still carrying guilt for leaving a comrade’s body behind in his last, disastrous mission for the SAS. Will it overwhelm him just when he needs to be at his most focused? 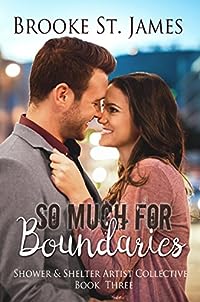 So Much for Boundaries (Shower & Shelter Artist Collective Book 3)
by Brooke St. James

Zoe Etheridge packed her bags and said goodbye to her small town Texas life. Her dad’s dying wish was that she followed her dreams in New York City, and she was bound and determined to make that happen. It was only a day or so into her trip when she realized she might have bitten off more than she could chew.

Zoe assumed that the Shower & Shelter Artist Collective was open to any artist who needed a place to live in the city. She had no idea that landing a spot in the house was highly competitive, and seeing how she wasn’t a formally trained artist, she wasn’t quite sure how to compete.

She called the collective on her way into the city and spoke with the manager, Lane Alexander. He quickly made her realize she was in a David versus Goliath type situation, but decided to meet with her nonetheless. She knew she had to impress him when they met, but she assumed it would be with her unique approach to painting. It wasn’t until she stared into his baby blues that she realized she wanted him to be impressed by more than just her art.