Chronicles of the Great Migration

Welcome to this post-apocalyptic world where once you start reading you won’t be able to stop. You’ll cry, laugh, and be on the edge of your seat from start tp finish with these amazing characters. Enjoy! 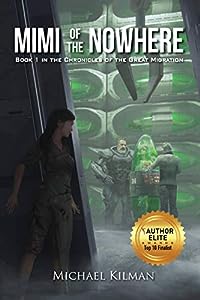 Mimi of the Nowhere: A Thrilling Dark Dystopian Adventure (Chronicles of the Great Migration Book 1)
by Michael Kilman

A finalist in the 2020 Author Elite Best in Sci-Fi Contest.

In the bowels of the giant walking city of Manhatsten, Mimi survives, homeless, and unique as the only telepath in what’s left of humanity. Mimi has isolated herself for centuries, watching the few friends and lovers she let close die, as she endures.

Then, after decades alone with her gift, something interrupts her telepathy. She realizes she might not be alone after all. Mimi soon discovers a secret that has remained hidden since the walking cities took their first steps a thousand years ago. A secret that could cost her life, or worse.

Will she survive, or will the city ultimately recycle her? 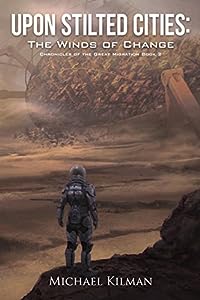 Upon Stilted Cities: The Winds of Change: An Action Packed Dark Dystopian Adventure (Chronicles of the Great Migration Book 2)
by Michael Kilman

The Children of Gaia won’t stop until every last walking city is destroyed.

The city of Langeles is rubble, resources are dwindling, and storm systems are larger than ever before. The people of Manhasten are in great danger, and they don’t even know it yet.

Life in the city hasn’t changed much in the forty years since Mimi joined her telepathic sisters of The Order of the Eye, but the winds of change are blowing, and their enemy, the Children of Gaia wait in the shadows to turn the city to ash. At the center of it all is one man, a man as ancient as the city of Manhasten itself, a man designated Runner 17. A man who is more then he knows, and maybe the only one who can save the city and the rest of humanity. 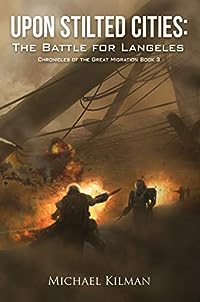 Upon Stilted Cities: The Battle for Langeles: A Thrilling Non-Stop Post-Apocalyptic Adventure (Chronicles of the Great Migration Book 3)
by Michael Kilman

The Ruins of Langeles are up for grabs, and two walking cities stand on the brink of war.

Saud has arrived, Runner 17 is near death, the women of Nowhere are missing, and Roderick’s plot to destroy Manhatsten is underway. Never before has Manhatsten faced such danger. Enemies lurk both inside and outside the city, and there is an assassin in Daniels’s ranks.

It will take all the power of the sisters of the Order of the Eye to protect the city. But Alexa Turon has seen the future and she knows what’s coming. She knows if they don’t do something, the city will fall. Can she and her new allies change the future or is too late to stop the inevitable? 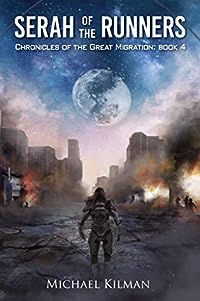 Serah of the Runners: A Mind-Bending Adventure On A Future Earth (Chronicles of the Great Migration Book 4)
by Michael Kilman

Manhatsten is in chaos, and the city AI has vanished.

The battle for Langeles is over, and it’s clear nothing will ever be the same. Security forces are scattered, the Runnercore is gone, and many are missing in the aftermath of the battle. In the streets, the Lowers are organizing, and rebellion is spreading. The city is on the verge of tearing itself apart.

It’s up to Serah, to find the few that remain of the Order of the Eye and discover a way to unite the city before Miranda and the Recycled return to finish what they started.

But from afar someone is watching Manhatsten, a force older than the city itself.