The Adam Park Thriller Series By A. D. Davies

If you like tough-guy detectives with a sensitive side, mystery and private investigator crime thrillers, and a violent edge, then the Adam Park detective series is just the series you are looking for. Adam Park stories are international mystery & crime thrillers that stand alone as one-off adventures, or can be read as a series charting one man’s evolution from a simple investigator to a true hard-boiled detective. This is the reading order so far: 1 The Dead and the Missing, 2 A Desperate Paradise, 3 The Shadows of Empty Men, 4 Night at the George Washington Diner, 5 Master the Flame, 6 Under the Long White Cloud 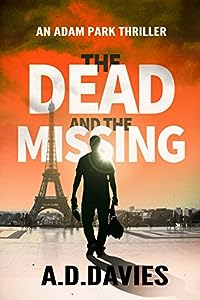 The Dead and the Missing: an Adam Park Thriller
by A. D. Davies

A missing girl. A PI out of his depth. An international criminal network that won’t hesitate to kill them both.

Adam Park is a man of contradictions: he hates violence, but he’s good at it; he’s too sensitive to those in need, yet he’ll bury his feelings when danger rises; he’s quit the PI game, but – when his old mentor comes calling with a missing person case – he cannot say no.

Returning to his home city, Adam soon learns his mentor’s niece made a poor choice of boyfriend, fell under his thieving influence, and both are on the run after crossing a ruthless criminal. So scared, it seems, they fled the UK for Paris, France.

With Adam under threat of death from that same criminal, he must recruit allies to help locate the terrified pair, fight his way through the Parisian underworld and – as he follows the clues and the violence – all the way to Asia.

The Dead and the Missing is an international mystery and crime thriller, featuring a PI who forged his skills in the relative comfort of the corporate world, but must now fall back on his basest instincts and embrace the hard-boiled existence required to get the job done. If he can’t, both he and a troubled young woman will meet a grisly end.

If you like tough-guy detectives with a sensitive side, mystery and private investigator crime thrillers, and a violent edge, pick up the first in Adam Park detective series today.

A dead aid worker. An island rife with secrets. A detective driven to solve it all.
With a damaging, violent case behind him, Adam Park is happy tending to his late mother’s canal barge, catching up on his reading, and hoping his increased training is never required. Unfortunately, he owes favors, and when an aid worker is murdered on the Greek island of Paramatra, one such favor is called in. Kai Pace’s parents believe the investigation into their son’s death is deeply flawed, and Adam is tasked with reviewing the police’s conclusions and – if found wanting – identifying the real killer. With the island struggling to cope with an influx of refugees, Adam must battle corruption and ruthless smuggling gangs, all amid people so desperate they will do anything to reach the paradise of the west. Plunging a private detective from the heart of Greece into northern Africa, fear and violence will take their toll upon him, and challenge the very nature of his soul. If he cannot stay the course and dig out the truth, a murderer will go free, and Adam will fall prey to the same evil.

For a fast-paced thriller with plenty of action, pick up your copy of A Desperate Paradise today. 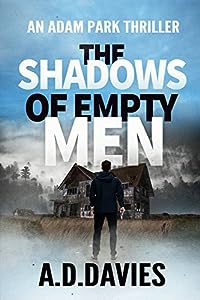 The Shadows of Empty Men (Adam Park Thriller Book 3)
by A. D. Davies

A troubled girl. A cabal that believes her possessed by an avenging spirit. A detective who will stop at nothing to protect her.
When PI Adam Park is retained to confirm the accuracy of a young heiress’s family tree, it sounds like the simple case he needs to break the monotony of life on an Aegean island. But it soon becomes clear that others wish to stake a claim to the girl’s fortune, and something as inconvenient as a private investigator will not stand in their way. As this group calls upon a shadowy killer known as the Pale Boy, Adam’s attention turns to the girl herself, learning her illness is viewed by some as “possession” by a spirit intent on righting wrongs from Porajmos, or “the Devouring”, the Romani genocide inflicted by Nazi Germany. And even those who profess to represent the girl may not hold her best interests at heart. Delving into a decades-old secret that people will murder to protect, Adam must fight smart and fight hard — against a seemingly supernatural mercenary, against people of unfathomable greed, and against his own darkening nature.

For a gripping, sometimes violent, thriller with a historical mystery at its heart, download The Shadows of Empty Men today. 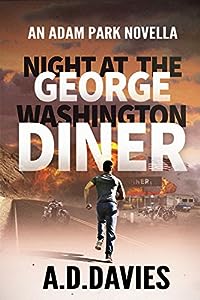 A PI a long way from home. A diner a long way from anywhere. A biker gang out for revenge.
Traveling through Croatia in his classic VW Campervan, troubled private detective Adam Park is ready to end his sabbatical and return home. But when he stops off at a kitch American-themed diner for some bad coffee and a good burger, the last thing he expects is to intervene in an aggressive domestic incident. And once he sees off the abusive boyfriend, he could not have predicted the guy would return. With friends. Violent friends.
If he and the other innocents in this isolated place are to survive the standoff until morning, the dark corners of Adam’s psyche that he thought tamed must be unleashed once more, forcing him to confront the notion that he may not be a million miles from the people he detests… and to question if he should be returning to a normal life after all.

Night at the George Washington Diner is an action-packed novella, about a third the length of a regular Adam Park thriller, which serves as a bridge between the two longer novels The Shadows of Empty Men and Master the Flame.

Following the case he believed would be his last, Adam Park is simply a guy trying to get home. But the vicious criminal who shaped Adam’s life for the past couple of years demands a final assignment: solve the case of a serial arsonist, and Adam is free of any obligation. Meeting with the original investigator of a hotel blaze that killed the son of a US mobster, Adam learns it is a fire she has always wanted to look deeper into. And his presence gives her that chance.
As new avenues indicate a serial vigilante firebug, Adam is propelled into a world of former-IRA smugglers and Russian mafia, punctuated by manipulative federal agents. It is a world he must learn to navigate swiftly if he is to survive. This gripping, all new Adam Park thriller sees the troubled private detective face organised crime families, a serial killer driven by vengeance and fury, and an FBI agent who will not compromise with any of them. 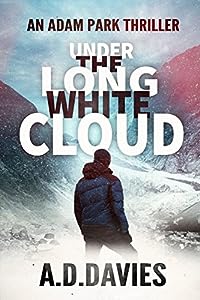 Under the Long White Cloud (Adam Park Thriller Book 6)
by A. D. Davies

A dead campaigner. Two grieving families. A detective partnership who cannot quit.
After a turbulent couple of years, private investigator Adam Park may have finally discovered a place to settle down and pursue his desire to help those less fortunate than himself: New Zealand, the Land of the Long White Cloud. A big part of his choice to quit traveling is his new partner: long-time friend Jess, who helps tame the dark impulses that have driven him in the past. But when a client dies just days after engaging the pair, both are curious. When it starts to look a lot like suicide, the client’s estranged widow begs them to delve deeper into the man’s past. And it is a past filled with desperate actions, fake identities, and paranoia. And that paranoia brought the dead man into conflict with a major corporation. When Adam and Jess latch onto the corporation’s activities in the small mountain town of Shelly Hill, they start to ask the same questions their client did: why is a subsidiary buying up land so quickly? Why are corporate executives working closely with a brutal drugs gang? And how far will they go to protect their interests? Under the Long White Cloud takes a man trying to change and puts his resolve to the test, pushing him to the very limits of his willpower, both emotionally and physically.