Well… It’s official. The ducks have moved into the neighborhood. Correction. They have moved into my neighbor’s yard. Not mine. I mean… I’m not hurt that they didn’t choose my yard. I get it. Fine. It’s not like I have put years of work into creating a sanctuary for wildlife that is both inviting and safe, with plenty of water to quench your thirst. It’s cool. In fact I really didn’t want ducks in my yard. I wanted quail! It’s not that you didn’t choose me… I didn’t choose YOU! HA!! This is just the kind of garbage that goes through your mind when you make a horrible pot of coffee. I am dumping it out and starting fresh. This coffee is making my mind have dumb thoughts. Stupid ducks and coffee

If you’d asked me a week ago, I would have told you that the best cupcakes were dark chocolate with chocolate cream cheese icing, that dancing in a crowd of magic wielders — the Adept — was better than sex, and that my life was peaceful and uneventful. Just the way I liked it. That’s what twenty-three years in the magical backwater of Vancouver will get you — a completely skewed sense of reality. Because when the dead werewolves started showing up, it all unraveled… except for the cupcake part. That’s a universal truth.

Ren is the first sorcerer in Fencura for three hundred years.
It’s up to Ren to discover why magic is dying in Fencura.
Nations fight over ancient artifacts, while a floating city of sorcerers control the global economy.
Only Ren can change the fate of Fencura that the gods have set.
Meanwhile in Austin, Texas, Kandice discovers her ability to see Aether Walkers.
After one of them killed Kandice’s mother, she vowed to hunt it down.
While hunting one night, Kandice met a fellow hunter.
Together they uncover a horrific truth about the city’s seedy underbelly.

Chronicles of the Seventh Realm is an engrossing Young Adult Epic Fantasy about an unfortunate cast of characters who’s fates are entwined.
The fate of two worlds rest in their hands.
Their choices will reshape the destiny of gods.

Mapton on Sea
by Sam Maxfield

NOTE: This book was previously published under the title The Last Resort

Stella loves her life in London, far from the foul-mouthed, flame-haired grandmother who raised her. Then Stella gets the dreaded call in the middle of the night; Gina has taken a tumble. Soon Stella finds herself trapped with Gina in the crazy coastal town of Mapton-on-Sea. Can Stella and Gina ever truly reconcile? As the June temperature soars, they, and the residents of Mapton, are in for an hilariously explosive summer. For a sprinkle of romance, mobility scooter gangs, and misbehaving dogs, you’re invited to Mapton-on-Sea.

Three hundred years of peace was unprecedented for the Kingdom of Kytheras, yet each citizen went about like it would never end. The young blacksmith, Aros Asilias, planned a life with his girlfriend. The young prince, Doren Tunsev, plotted abdication. And the young mage, Rikki Nasem, dreamed of her freedom. All the while, the immortal King Neanthal remained locked in his prison. No one believed his followers would return, or that they would be capable of releasing him. But when they reappear and swear to do just that, it falls to Aros, Doren, and Rikki to stop them. 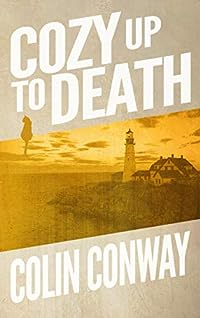 Cozy Up to Death: a novel about a bookstore, a cat, knitting, and blood (The Cozy Up Series Book 1)
by Colin Conway

A man in hiding. A gang of outlaws searching for retribution. This is no time for cupcakes.

Today is Brody Steele’s first day as the new owner of The Red Herring, Pleasant Valley, Maine’s only mystery bookstore. The cute shop has a loyal customer base as well as an ornery cat.

Unfortunately, Brody doesn’t know the first thing about running a legitimate business, he doesn’t want to be in the small town, and he hates cats. On top of all that, he hasn’t read a book since high school.

When a cute woman walks into the store, he thinks his bad luck is about to change. But as she starts asking about the previous owner’s whereabouts, his safe new existence begins to unravel.

For Brody Steele is a man with a secret he must protect at all costs. The U.S. Government has invested a lot to keep it hidden, and his enemies will stop at nothing to expose him.

Does happiness or death await Brody in this charming seaside community?