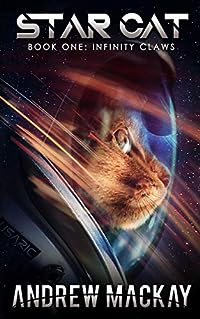 IN SPACE NO ONE CAN HEAR YOU PURR.

What if Jelly the Cat is our only chance?

Enceladus, one of Saturn’s moons, was where the lost expedition Space Opera Alpha vanished. It was assumed they’d all died, but a strange message left Mission Control with hope. Why wouldn’t survivors send a longer distress call?

It was only two words, but what do they mean?

Only the common household cat seems to understand it.

Now, the prowl is on to find the best-suited cat to join Space Opera Beta’s rescue team to Saturn. She will will be judged on her agility, prowess, obedience, and combat. The winner will be crowned Earth’s first Star Cat, and equipped with Infinity Claws to battle anything who stand in her way.

But her crew of humans have no idea how important the little fuzzball is to the future of the universe, how vicious she can be to friends and foes, or just how disobedient she can get whenever she feels like it… 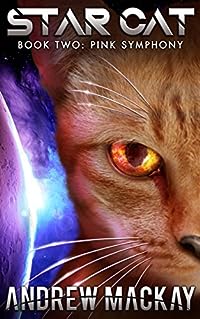 Want your universe back? Come and get it.

Jelly Anderson may only be 30 cm tall and weigh 7.5 pounds, but she also has nine lives. You don’t.

She decoded Saturn’s distress call and saved Space Opera Beta from annihilation. Now, the crew have made fantastic discovery. It’s called Pink Symphony- an evolutionary force of nature. There’s just one catch…
Humanity is next on Pink Symphony’s kill list.

Strange things are happening to the crew. Riddled with claustrophobia and paranoia, anyone could snap at the flick of a whisker and turn lethal–and in the chaos, everyone has failed to notice what’s happening to Jelly. She’s getting bigger, stronger, faster… smarter.

Let’s pray her transformation is for the good of the universe. If it isn’t, the consequences are too horrific to comprehend. 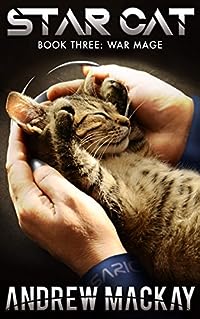 The universe is a mother.

Now pregnant, Star Cat Jelly Anderson and the crew of Space Opera Beta are waiting for USARIC’s search and rescue vessel to save them. Outnumbered and outgunned, the aliens are closing in and ready for blood.

Rescue or certain death. Only one will get to them first.

The crew can’t take any chances. They need to train Jelly to defend both herself and the gift inside her. Wool will coach her on suppressing her primal instincts. Jaycee will train her with firearms. Bonnie will teach her how to kick alien ass. It’s their only hope for survival.

In training an animal to fight, the crew have created an unstoppable beast who’s about to multiply. Jelly Anderson came to save the universe and kick some ass. Now, she’s all out of universe.

Star Cat 3: War Mage is the third installment in your favorite mind-blowing science fiction & fantasy adventure. Get it now. 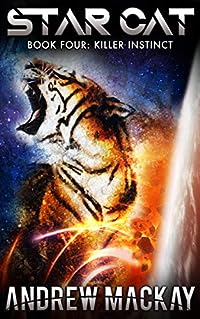 If you’re going to shoot evolution in the back, you’d better not miss.

Trying to get back home, Jelly Anderson and the surviving crew of Space Opera Beta have crash-landed on a mysterious planet.

An alien entity much bigger, smarter, and violent than they can imagine is lurking on this dark planet. Its name is Mastazita, and it’s waiting for the perfect moment to strike. The crew are desperately unaware, and dangerously ill-equipped to fight.

Give a cat no option, and you leave her no choice.

These alien beings mess with Jelly Anderson and her family at their peril. Now a towering feline monster ready to murder, she’s ready to protect her loved ones, even if it means a fight to the death.

Killer Instinct is the fourth installment in the best-selling sci-fi fantasy series. An emotional juggernaut of pure action, suspense is coming for you. Get it now. 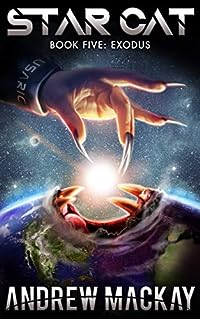 Star Cat Jelly Anderson, her daughter Furie, and what little remains of the original Opera Beta crew are stranded on a remote planet. They just want to get back to Earth but their ride is damaged beyond repair.

Be careful what you wish for.

The aftermath of the Star Cat Project has brought western civilisation to its knees. USARIC and the International Repatriation Initiative have joined forces to remove all Russian nationals from the US in a catastrophic mass exodus. The rebels at R.A.G.E. are set to retaliate, and have the firepower and mechs to pull it off.

Alex and Jelly have a plan to get back to Earth–an idea so crazy that it might just work. Surviving the journey back to Earth is an almost impossible challenge; one that will test their physical acumen, survival instincts, and psychological well-being.

Both Jelly Anderson and war are coming home. It’s just a matter of who gets there first. 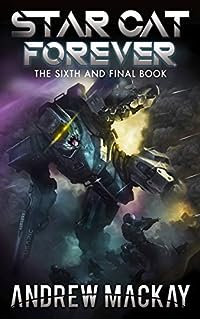 The epic conclusion to the best-selling sci-fi fantasy series.

She left Earth as an adorable house cat. Now, Jelly Anderson returns to Earth as a ruthless killing machine, hell-bent on avenging those responsible for putting her crew’s lives in danger. She’s one angry cat desperate for blood.

USARIC and CEO Maar Sheck are the only names on her hit list.

USARIC found her escape pod first. They want to know everything about Opera Beta’s doomed mission to Saturn. All Jelly wants is to be reunited with her owner. The corporation has thousands of mercenaries, death-droids, and mega-vehicles at their disposal ready to bury the truth about the Star Cat Project.

It will be the war to end all wars. All we can do is pray that Star Cat Jelly Anderson is on our side.