The Seeds of Chaos by Azalea Ellis

The Seeds of Chaos by Azalea Ellis is in a dark and deliciously violent adventure series that combines science fiction, fantasy, and game elements. You’ll love Gods of Blood and Bone because of the electrifying action, flawed characters, and kick-a$$ heroine. Enjoy!

Leveling up would be amazing… … if it weren’t so deadly.

They injected me with a VR chip, a GPS tracker, and my first Seed. They gave me unbelievable powers.

Then they sent me to fight.

The monsters here are alien and vicious. There is a second moon in the sky. I watched a tree start moving and kill someone. And the other Players… ?

I’m alone. I’m weak. And I’m scared. But I will cling to life by the tips of my bloody fingernails.

Who is behind this twisted game? Where are they sending us? Is there anyone I can trust?

If I want to survive, I have to get stronger. But can I do it before the Game kills me? 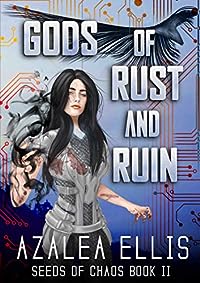 Gods of Rust and Ruin: A GameLit Novel (Seeds of Chaos Book 2)
by Azalea Ellis

I made a horrible mistake.

Some fates are worse than death.

I thought at least my mind was safe from NIX, that my choices were my own. I thought I could trust my allies. I was wrong.

Now we all have to pay the price.

A new, seemingly impossible quest from the Oracle has seared itself into my brain. Enemies are watching our every move. NIX is experimenting on my brother.

And my new power is eating me alive. Literally.

What is NIX planning? Can I keep my condition a secret long enough to get us out of here? Is the genocidal, half-crazed alien imprisoned below our only hope of salvation?

And if so, can we manage to free him… without getting ourselves killed? 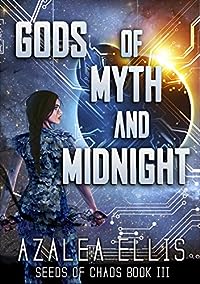 Gods of Myth and Midnight: A GameLit Novel (Seeds of Chaos Book 3)
by Azalea Ellis

Aliens have invaded Earth, and Eve is pretty sure it’s her fault.

The alien queen holds a grudge against Eve and her teammates. To avoid having their throats slit while they sleep, they escape the palace and set out to stop the real cause of the war, which is also slowly killing half her teammates — the incurable alien plague that NIX unknowingly weaponized. To save the people she cares about (and everyone else who happens to live on either world), Eve will have to fulfill an ancient prophecy.

They only have to escape back to Earth, avoid being caught by the queen’s agents or killed in the planet-wide war, and find a greater god that has been missing for millennia. No problem, right? 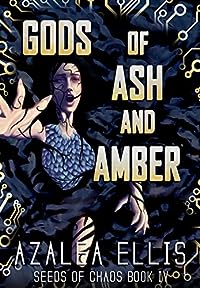 Gods of Ash and Amber: A Gamelit Novel (Seeds of Chaos Book 4)
by Azalea Ellis

I didn’t start this war, but I will finish it.

I thought we had won, that the worlds were safe. Then I had one final vision, and I saw the truth. The Abhorrent, the eldritch, evil force behind Pestilence, was undefeated and still intent on devouring the light of everything good.

I saw that I would fail, everyone I loved would die, and without us the worlds would crumble, even the gods unable to stand against the Abhorrent.

This left me with one question:

How does one go about changing the future?

They tell me the Abhorrent is immortal.

As far as I’m concerned, that’s just a slight inconvenience. 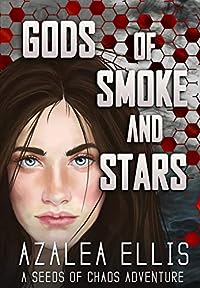 Gods of Smoke and Stars: A Seeds of Chaos Adventure
by Azalea Ellis

My name is Eve Redding. You may have heard of me.

Since curing the Sickness, my team and I were in high demand. That’s why we were in a remote, smoke-filled desert attending a tournament-style Trial to honor the local goddess. Then, some idiot thief with an agenda beyond simple treasure decided to steal the Oracle’s third gift, a puzzle band that would grant prophetic visions when solved.

They gave it to the local goddess as an offering. If I wanted it back, I had to enter the blood games, and win.

Gods of Smoke and Stars is a side adventure novella that combines science fiction and game elements. Fans of Ready Player One, Red Rising, and The Hunger Games will likely enjoy this series.