See Ya Next Year Santa!

Today has a bit of an odd feeling to it. Christmas with my family was wonderful. Lots of great food, and thoughtful gifts. During this pandemic we have been keeping our social circle extremely small, so we were able to see them during Christmas. I absolutely love the holiday season with the shiny decorations and the twinkling lights, and I hate to see it come to an end. But once that last present is unwrapped and I have finished my nap, I am ready to kick Christmas out the door. The decorations have already started coming down. I will leave my tree up for now, but there are no guarantees that it will be up for New Years Eve. I am anxious to get everything packed away so that I can begin preparing for Spring. I bought quite a few bulbs that I am very excited about getting in the ground. It is finally consistently cold, so it’s the perfect time to plant them. I am hoping to make my front yard look like Dr Seuss designed it. I bought about five bags of Allium bulbs, that look like puff balls in purple and pink, ranging from small to extremely large. I always go crazy buying bulbs, but never really consider all the work it will take to plant all of them. I will start today and just go until I drop. FUN FUN!! 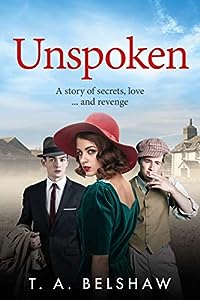 Unspoken: A story of secrets, love and revenge
by T. A. Belshaw

A heart-warming, dramatic family saga. Unspoken is a tale of secrets, love, betrayal and revenge.

Unspoken means something that cannot be uttered aloud. Unspoken is the dark secret a woman must keep, for life.

Alice is fast approaching her one hundredth birthday and she is dying. Her strange, graphic dreams of ghostly figures trying to pull her into a tunnel of blinding light are becoming more and more vivid and terrifying. Alice knows she only has a short time left and is desperate to unburden herself of a dark secret, one she has lived with for eighty years.

Jessica, a journalist, is her great granddaughter and a mirror image of a young Alice. They share dreadful luck in the types of men that come into their lives.

Alice decides to share her terrible secret with Jessica and sends her to the attic to retrieve a set of handwritten notebooks detailing her young life during the late 1930s. Following the death of her invalid mother and her father’s decline into depression and alcoholism, she is forced, at 18 to take control of the farm. On her birthday, she meets Frank, a man with a drink problem and a violent temper.

When Frank’s abusive behaviour steps up a level. Alice seeks solace in the arms of her smooth, ‘gangster lawyer’ Godfrey, and when Frank discovers the couple together, he vows to get his revenge.

A city in meltdown. Corruption at the top and war on the streets. Can one man stand alone?

Tales from Stool 17; Finding Port St. Joe is the first of a three-part series that will leave you wanting more!
“I’m not running. I’m not hiding. I’m just going. There’s a difference.”

Compelled to retire from the only life he’s ever known, Navy Chief Petty Officer Nigel Logan discovers his only option is to disappear from a violent past and a killing that haunts him.

In the quiet darkness of night, he slips out of Norfolk, Virginia on his sailboat, MisChief, a 32-foot Pearson Vanguard. Sailing to destinations unknown, he ultimately is drawn to the sleepy coastal town of Port St. Joe on Florida’s beautiful Forgotten Coast. Ashore, he finds some of the craziest and lovable people to help him forget what he left behind. But, while a new home and friends help distract him from his dark past, Nigel Logan knows in the back of his mind it will always be there, patiently waiting. 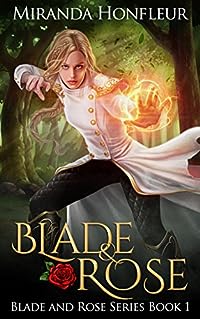 She trusted him once.
He betrayed her twice.
A third time could bring an entire kingdom to its knees…

Stuck in a betrothal to a cruel werewolf fiancé, Rielle works for the Divinity of Magic, the one thing keeping her from his claws. And the head of the Divinity knows it, giving her every mission no one else wants and few can handle. When an enemy of the Divinity invades their walls, someone needs to frogmarch him home, with no detours. No mage would ever want to handle a magic-nullifying knight… So, of course Rielle is assigned to do it.

The way to their destination is rife with danger — a civil war is brewing, and tangled somewhere in it is Rielle’s best friend, Olivia. When whispers reveal mercenaries have killed the king, taken the capital, and that no one is coming to help, Rielle can’t leave Olivia in peril. But as infamous mages and deadly assassins hunt her holy knight charge, she can’t leave him unprotected either — especially as she finds herself falling for his strength, his passion, and his uncompromising goodness…
Her past returns to haunt them, her werewolf fiancé stalks their steps, and an ancient evil is gathering, yet the restraints forbidding their love strain and snap one by one. Can they overcome the war in their way, or will trusting a two-faced ally tear them apart, and leave Olivia and an entire besieged kingdom to fray at the ends… ?

Readers who loved A Court of Thorns and Roses and Kushiel’s Dart will cheer on this heroine who never gives up, in the first book of a heart-wrenching romantic epic fantasy series.

Welcome to a medieval world sensual and dark, full of magic and greed, love and blades, where factions vie for influence and there are no easy choices… 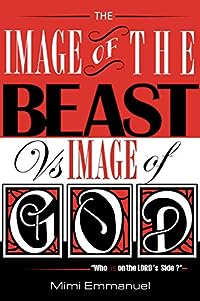 Join this #1 international bestselling author to discover what God meant when He said, ‘Don’t make an image or likeness of anything.’
Find out how to embrace God’s image instead of the beast’s and be rewarded with a more peaceful and fulfilling life.

Read what the ancient Jewish people, early Christians and Jesus have to say about imagery.

These rarely quoted Scripture gems are from the timeless wisdom of the Bible and will help you prioritise and find oodles of leisure time you may not have realised you had.

We’ll read about the various Biblical Beasts.
• We’ll look at the Number, the Name and the Mark of the Beast.

• We’ll talk about Hexakosioihexekontahexaphobia which is the fear of the number “666.”.

• We’ll discuss antidotes against the mark of the Beast.

• Discussion of Heavenly court case that we’re all invited to.

• How to claim our bonus of an extra 10 years of leisure time.

• Historical little-known facts about the image of the Beast.

• How to claim an extra 14 years of spare free time for yourself.

Rediscover and deepen your faith

She’s best known for her thorough research and for simplifying complex issues.

The following comments are from readers of the ‘Truth, Love & God series:'”The Bible made simple so a child can understand; The author’s style is conversational and easy to read, You get used to the Australian colloquial slang and it makes the book endearing.

The author makes a straightforward and simple breakdown of the most controversial, scholarly, world impacting, historical document of all time; The Bible… I love it! The author paints the picture accurately, starting with love and ending with love because that is God; love.

“Essential Reading: Cuts Through Biblical Confusion: Mimi Emmanuel has capped her series with a Biblical tour-de-force which captures what I believe is the core truth of the Scriptures.”
Promises to my readers and content of the Book

• Antidotes against the mark of the Beast. Removing all fear

• Freebie download – “This is Love According to God’s Will.”

• Seven facts about the Beast from the Bible.

• How to cast out the devil as taught by Jesus.

• A Beast detox list of 24 things to help you stop your flirtation.

• The unmasking of a false prophet.

• 24 years of leisure time up for grabs!

In the author’s quest for the truth she discovered a promise of 24 years of free spare time, within the average lifespan, to do with as you will… guaranteed! (unless you’ve already accepted these blessings).

It’s possible at any stage to tap into this ancient wisdom, turn our life around and live a more rewarding and meaningful life.

To receive these blessings of leisure time; embrace God’s image instead of the Image of the Beast.

For a summation and super quick read, you can start at Chapter Eleven and Chapter Twenty.

You can start reading today, or email the book as a gift to a special friend.