The Frank Gould Mystery series by Alan Asnen are mysteries like no other.  Asnen describes this series genre as “Slap-yourself-silly-sarcasm-with-a-serious-side-mystery-and-a-hefty-dollop-of-romantic-comedy-thriller”. A Bit of a mouthful, but highly accurate. Asnen’s writing is so engrossing, fun, funny, yet deep and sad. This is a very unique mystery series that shouldn’t be missed. Enjoy!

A terrorist comes back from the dead and Frank Gould’s world is slowly turned upside down.
What Frank does not know as he sinks deeper into a trap, following tracks, is that the world at large is upside down. He has been buried away, inattentive, and now coming back to life like a drowning man struggling back to the surface. A shore where once his wife and daughter lived… Where today he listens to a young woman convinced by her dying father of a crazy plot no one else believes.
Frank, once a man of letters, has been eking out a living by finding pets and lost objects, now and then a missing spouse for friends. Widowed for years and mending a broken heart. Here comes an opportunity for something big, a thrill ride, and an experience of youth.
Yet, there’s that trap awaiting, and as he moves deeper into it, his prior years of experience as a professor and journalist tell him something is amiss. He has other training as well… There may be more mysteries within Frank Gould than the mysteries he pursues outside.

This first in a four-part introduction to a new series begins a long story, setting things… in motion, as it were. Kind of a train getting started. Because, as you’ll discover, these are no small crimes and no small-time criminals. 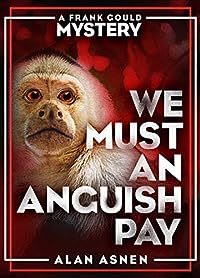 In this second book introducing THE FRANK GOULD MYSTERIES series, Frank, Paula and Melissa are following the trail of the terrorist, Terry Blankenship on one side of the Atlantic and a mysterious, black-clad Hollywood producer on the other.
They find themselves globetrotting and deeper than ever in the machinations of people who will do anything evil to make a dollar on a global scale. A kidnapped monkey. Blackmailers. Child sex slavers.
Want to know more? Read the book description for the previous title, BUT TELL IT SLANT. Better yet, read the book and get to know the story… an absolute necessity to pick up where this one begins… For this is the continuation of a what began with BUT TELL IT SLANT which introduced this four-novel saga of Frank Gould and his coterie, who (hopefully) will be around to solve other crimes, share other adventures after the derring-do in these first four novels is complete.
Soon, maybe, as the cat is now stretching a bit and, you know, giving googly-eyes. 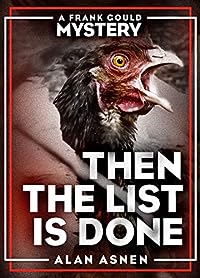 The third volume in THE FRANK GOULD MYSTERIES brings us closer to a final confrontation with all the evils Frank and his allies have been unmasking.
Frank is pulled back to the Midwest only to discover the spiral is both widening and narrowing in ways that sharpen and confuse. A friend half beaten to death and a villain revealed as Frank, Paula and Melissa defend the local LGBTQI community and discover deeper international evils threading through the soil… Don’t let the title fool you. The list may be done, but the shopping awaits! 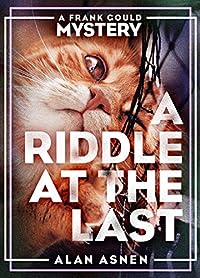 Frank Gould has faced his demons, inside and out. All except the one he thought was dead for certain.

Now he has to confront the lie everyone else believes, that Frank Terpil, the biggest gun runner and trainer of assassins in world history, is not only alive, but young and, incredibly, is his father. Can any of it be true? Traveling to Switzerland on a mission to kill Terpil, will he find out? Will he and his comrades return alive?

And what of his newest nemesis, the hateful General Simonsen who traffics in human slaves and has been behind all the mayhem they have confronted? Will Gould be able to return and mete out justice? Protect his loved ones from Simonsen’s vengeance?