“Another crazy, fast-paced mystery sure to leave cozy fans chuckling and waiting for the next adventure.” –Booklist 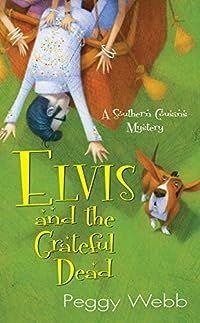 When the first Elvis impersonator is found slumped over his piano, a heart attack seems the likely suspect. But when a second keels over mid-swagger at Callie Valentine Jones’s party, suspicious minds begin to wonder if something foul is afoot. Because everyone knows two dead Elvis impersonators add up to only one thing: murder.

As it turns out, Callie’s cousin Lovie–a 190-pound bombshell who’s had more lovers than the King had hit records–turns out to be suspect #1. Callie knows she’s innocent but to prove it, she and Lovie will have to find out who the real killer is. It’s a mystery fit for a King, and with a little help from Callie’s hunk-a-burnin’ love ex Jack, and her talented hound dog Elvis–who’s convinced he’s the true reincarnation of the King–Callie and Lovie are determined to have the killer singing Jailhouse Rock. But they need to move fast and be ready for the killer’s next move, because their chance may be now… or never!