Ten in the Chamber: Reloaded

In Ten in the Chamber: Reloaded, a cadre of your favorite authors have returned to once again bring you all the thrills of the urban supernatural, with a twist of sci-fi noir, in a brand new 1500+ page collection of full length novels and spellbinding novellas you won’t want to miss! 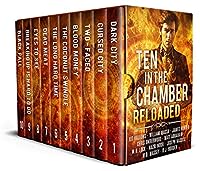 These hardboiled cops and investigators specialize in a preternatural kind of justice. They aren’t afraid to delve into dark magic or wield a cursed instrument to save the pure and innocent, and they won’t quit until every dark deed is punished and the scales of justice are set right.

Dark City by Kit Hallows
Demons, vampires, and rogue magicians are all in a night’s work for Supernatural Detective Morgan Rook. But a new darkness has come to the city; a sinister evil from another world that will test his very soul.

Cursed City by William Massa
My name is Mike Raven, but the world knows me as the Shadow Detective. Orphaned by demons at the age of ten, I have dedicated my life to keeping the world safe from nightmares. Trained by one of the greatest monster hunters who ever lived, and armed with an arsenal of mystical weapons, I battle forces beyond human understanding. Trust me, it’s not as glamorous as it sounds

Two Faced by James Hunter
Ancient Demons. A Terrible Curse. Only one woman can save the day… though she’s not really a woman at all.

Blood Money by Chris Underwood
Folk wizard Ozzy Turner can track down anyone, but when he’s hired to return a missing bloodslave to her vampire mistress, the question is not whether he can, but whether he should.

The Coconut Swindle by Matt Abraham
When the world’s largest diamond is stolen in an impossible caper, super villain turned PI, Dane Curse, follows the trail back to his very own daughter.

The Long Hard Time by W.H. Lock
Dwight Collins, a former super villain, went to jail for murder seven years ago. Now he’s out and he wants to hire private detective Jack Story to find his bride, who disappeared the night he was sent to jail. The only problem is that the trail leads to the door of one of the most powerful and mysterious superheroes the world has ever known.

Dead Meat by Nazri Noor
Nephilim renegade Mason Albrecht and his angelic mentor Raziel only wanted to sit down to a good steak dinner. But something far darker – and certainly deadlier – is on the menu.

Eyes to See by Joseph Nassise
In this groundbreaking urban fantasy series opener from New York Times bestseller Joseph Nassise, a grieving father makes a desperate bargain with forces beyond his control, revealing the supernatural world he’ll need to survive in order to rescue the daughter who vanished into its dark depths several years before.

Breaking Up is Hard to Do by M.D. Massey
Larry the Chupacabra’s ex wants him back, dead or alive. Kiki is a zombie corgi with an axe to grind, and if she can’t win her boyfriend back she’ll settle for turning Austin into Night of the Living Dead: Animal Edition. Now Colin, Larry, and a cast of offbeat characters have to stop Kiki before she starts an undead outbreak in the young druid’s beloved hometown…
Black Fall by D.J. Bodden
Jonas Black grew up thinking he was a normal kid, but it turns out he’s daywalking-vampire royalty. When his father goes missing, he joins the Agency his parents founded. The psychic training may leave him insane, if new friends and old enemies don’t kill him first.