In a city of bootleggers and crime, one woman must rely on a long-dead lawman to hunt down justice…If you like headstrong heroines, Prohibition-era criminal underworlds, and a touch of the paranormal, then you’ll love Sherilyn Decter’s gripping tale. Experience the dark side of the Roaring Twenties today!

Philadelphia, 1924. Maggie Barnes doesn’t have much left. After the death of her husband, she finds herself all alone to care for her young son and look after their rundown house. As if that weren’t bad enough, Prohibition has turned her neighborhood into a bootlegger’s playground. To keep the shoddy roof over their heads, she has no choice but to take on boarders with criminal ties.

When her son’s friend disappears, Maggie suspects the worst. And local politicians and police don’t seem to have any interest in an investigation. With a child’s life on the line, Maggie takes the case and risks angering the enemy living right under her nose.

Maggie’s one advantage may be her oldest tenant: the ghost of a Victorian-era cop. With his help, can she find justice in a lawless city? 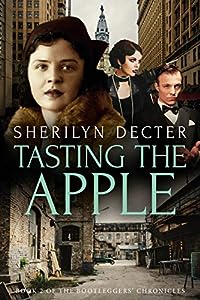 A young widow on the edge. A policeman back from the dead. Together, can they take down the city’s most notorious bootlegger?

Philadelphia, 1925. With a son to raise and boarders to feed, Maggie Barnes is at her wit’s end. But when a criminal element infiltrates the police force, the single mother puts her cares aside to help. As she tries to dig up dirt on bootlegger mastermind Mickey Duffy, Maggie realizes she can’t take on the case alone.

Inspector Frank Geyer used to patrol the streets of Philadelphia before Maggie was born. As he attempts to clean up crime from beyond the grave, the spirit uses his Victorian sensibilities to fight back against lawbreakers. But with corruption throughout the police force, can the phantom informant save his city and Maggie’s livelihood?

With the roof leaking and the lawlessness spiraling, Maggie and Frank have one chance to take down a criminal and prevent the unthinkable. 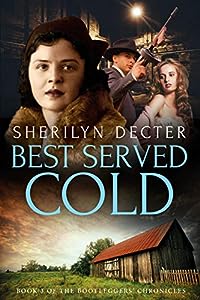 She’s still out for justice. A rival vies for his crown. On the dark city streets, no one stays on top for good…

Philadelphia, 1926. Maggie Barnes keeps getting one step closer to putting bootlegger Mickey Duffy behind bars. The next hurdle for her and the ghostly cop by her side is an unreliable and unstable witness. But to finally achieve her goal of justice, she may just have to team up with her enemy’s greatest rival.

Mickey Duffy is struggling to hold his underworld empire together. As he fights off small-time bootleggers and his own growing demons, the Baileys make a move to take over his turf. When an assassination attempt on Mickey just misses the mark, he vows to fight back with devastating consequences.

With bullets flying in both directions, can Maggie survive to put Mickey behind bars or will she be caught in the crossfire? 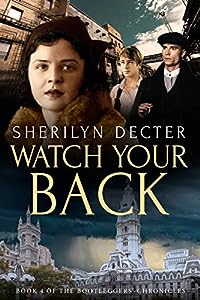 Watch Your Back: When a mother gets too close to Philadelphia’s most notorious crime boss, will she stay on the right side of the law to protect her family? (Bootleggers’ Chronicles Book 4)
by Sherilyn Decter

A mother’s dilemma. A crime boss and his crumbling mind. Will she make him an offer he can’t refuse?

Philadelphia, 1928. Maggie Barnes has a growing gangster problem. Her recently beaten-up son just accepted a job with the town’s most notorious criminal. Now she’s torn between accepting the crook’s city-wide protection offer, or putting the violent racketeer behind bars.

Mickey Duffy ignores the rumors that his sanity is failing, choosing to relieve his paranoia with heavy-handed violence. But as he awaits word of a critical mob boss meeting, he discovers that someone stole the records of his secret accounts. Now his only way to avoid jail might be a deal with the woman who’s always wanted him locked up.

With a Grand Jury investigation looming, Maggie’s insider information puts her directly in the line of fire. Can she keep her son safe without joining the devil and dooming the city she loves 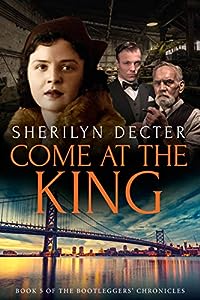 Come at the King (Bootleggers’ Chronicles Book 5)
by Sherilyn Decter

She’s losing her business. He’s lost his mind. As the Great Depression closes in, will either of them survive?

Philadelphia, 1931. Maggie Barnes isn’t proud of everything she’s done to make it this far. But with her bank closed and her accountancy clients circling the drain, she may be all out of options. With her livelihood in danger, her only path toward keeping the lights on may be working with a vicious mobster one final time…

Mickey Duffy’s sanity hangs by a thread. Convinced there’s a rat in his family, the ruthless bootlegger hires occasional enemy Maggie Barnes to nail the traitor. But with both the cops and the mob threatening to take him down, his latest effort to clean house could get him killed.

When Maggie discovers a dark secret in Mickey’s books, the criminal completely snaps. Will her less-than-legal efforts to keep her business afloat end up getting both of them killed?