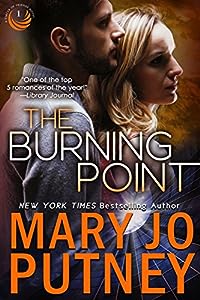 This novel was previously titled as Stirring the Embers. It is now being rereleased under its original title The Burning Point.

The first contemporary novel by New York Times bestselling author, The Burning Point is a riveting story of the ties that bind two people together — and the incendiary forces that can tear them apart.

Kate Corsi always dreamed of working for her family’s world famous explosive demolition business — a wish her old-fashioned father denied until the day he died. According to his will, Kate will receive a fortune while her ex-husband, Donovan, will inherit the family business. But only if they agree to live under the same roof for a year.

Forced into a reluctant alliance, Kate and Donovan must discover the truth about her father’s death — and confront the past that almost destroyed them both. And as they face their shattered dreams, their wrenching secrets and bitter resentments, they find themselves sliding perilously toward the burning point where passion catches fire once more…
The Burning Point was listed as one of the five best romances of the year by Library Journal. 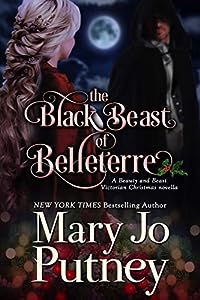 The Black Beast of Belleterre: A Victorian Christmas Novella
by Mary Jo Putney

The Beauty and the Beast: a haunted and hidden lord, a desperate young beauty, and a marriage of convenience between two people who yearn for more…

James Markland, Lord Falconer, knows that he is ugly, very ugly, and he lives a life of seclusion, wearing a heavily cowled mantle to conceal his face from the world. When he learns that a neighboring girl, the exquisite young Ariel Hawthorne, is about to be sold into marriage with a revolting lecher, he offers her the only protection he can: his name. Of course it will be a marriage in name only, because what woman could want him?

A talented artist, Ariel is cursed by her beauty and vulnerability. Though she never sees her husband’s face, she is drawn to his kindness and generosity, but he is determined to push her away. Will he allow her to love him before it’s too late? Perhaps the magic of Christmas can bring them together…

The Dragon and the Dark Knight: A Romantic Fantasy Novella
by M.J. Putney, Mary Jo Putney

In the days of knights, ladies, and dragons…
The Bar Sinister and a Damsel in Distress

Base-born Sir Kenrick of Rathbourne has earned his living as an itinerant tournament knight. His skill supports him and his squire, but his dream of a manor and wife and family seems impossibly distant. Then he hears of a wealthy baron in Cornwall who is looking for a champion to slay the dragon that is terrorizing his lands. The reward will be a manor by the sea. Kenrick believes dragons are only a legend — but the prize makes the story worth investigating.

But there really is a dragon — and a dozen knights have failed to vanquish it. And when he finds a luminous lady in distress, the real challenge is protecting her and her dragon…

The Dragon and the Dark Knight novella was originally published in the Dragon Lovers anthology. 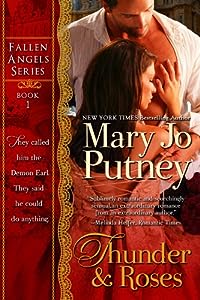 A Welsh Methodist minister’s daughter changes her life when she appeals for help to Nicholas Davies, a half-Gypsy earl…
They called him the Demon Earl. They said he could do anything. Son of a rogue and a Gypsy, Nicholas Davies was a notorious rake until a shattering betrayal left him alone and embittered in the Welsh countryside.

Desperation drives quiet schoolteacher Clare Morgan to ask the Demon Earl to help save her village. Unwilling to involve himself in the problems of others, Nicholas sets an impossible price on his aid–only if Clare agrees to live with him for three months, letting the world think the worst, will he intervene.

Furiously Clare accepts his outrageous challenge, and the two are swept into an intoxicating Regency world of danger and desire. As allies, Clare and Nicholas fight to save her community. As adversaries, they explore the hazardous terrain of power and sensuality. And as lovers, they surrender to a passion that threatens the very foundations of their lives. 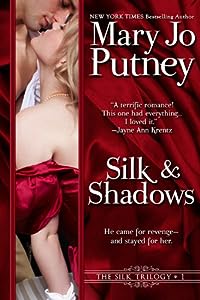 He called himself Peregrine, the wanderer, and he came to London for revenge…
Like the falcon he named himself for, Peregrine is wild and free, an exotic prince who fascinates 1839 London with his wealth, mystery, and dangerous allure. He emerged from his mysterious Asiatic past to exact retribution for an appalling crime. Nothing and no one can stop him — except perhaps Lady Sara St. James, whose fragile beauty conceals a gentle heart, genuine goodness, and a soul of steel.

Unable to resist his seductive charm, Lady Sara turns away from her ordered life to embrace a man she loves, but cannot fully trust. In Sara, Peregrine sees a chance for a life beyond revenge. But can he keep her without revealing his devastating secrets? Or protect her from the enemy he has vowed to destroy?