Wilderness: A Novel by Lance Weller

In its contrasts of light and dark, wild and tame, brutal and tender, and its attempts to reconcile a horrific war with the great evil it ended, Wilderness not only tells the moving tale of an unforgettable character, but a story about who we are as human beings, a people, and a nation. Lance Weller’s immensely impressive debut immediately places him among our most talented writers. 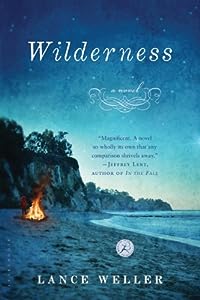 Wilderness: A Novel
by Lance Weller

Thirty years after the Civil War’s Battle of the Wilderness left him maimed, Abel Truman has found his way to the edge of the continent, the rugged, majestic coast of Washington State, where he lives alone in a driftwood shack with his beloved dog. Wilderness is the story of Abel, now an old and ailing man, and his heroic final journey over the snowbound Olympic Mountains. It’s a quest he has little hope of completing but still must undertake to settle matters of the heart that predate even the horrors of the war.

As Abel makes his way into the foothills, the violence he endures at the hands of two thugs after his dog is cross cut with his memories of the horrors of the war, the friends he lost, and the savagery he took part in and witnessed. And yet, darkness is cut by light, especially in the people who have touched his life-from Jane Dao-Ming Poole, the daughter of murdered Chinese immigrants, to Hypatia, an escaped slave who nursed him back to life, and finally the unbearable memory of the wife and child he lost as a young man. Haunted by tragedy, loss, and unspeakable brutality, Abel has somehow managed to hold on to his humanity, finding weigh stations of kindness along his tortured and ultimately redemptive path.