“Privateers will grab you by the collar and won’t let go until Charlie Newton gives the nod. Rarely have I read a book so absorbing, so sharply written, so filled with action that it thrusts you into the real world and makes you look hard at its beauty and its heartbreak.” — Jonathan Eig, New York Times bestselling author of Get Capone 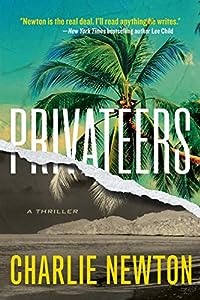 World War I rages. US marines storm Haiti’s Banque Nationale, loot $26 million in gold, then vanish. A century later, clues surface during the demolition of a Chicago racetrack, pointing to the Corazón Santo — the notorious triangle of Havana, Kingston, and Port-au-Prince. Three fierce, vibrant women reunite to hunt the treasure, hoping it will buy their survival from a long-buried, catastrophic misjudgment. They conscript a streetwise Chicago horseplayer’s help, then risk a return into the Caribbean’s mangrove jungles and mountains that have tried to kill them before. The uneasy partners are quickly swallowed in a terrifying labyrinth of shadow government and modern-day piracy where a final choice will be forced upon them: gold, survival, or redemption?