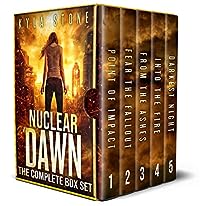 In a matter of seconds, terrorists detonate multiple nuclear bombs across the U.S. Millions flee the destruction. Chaos erupts as the fallout descends…
Dakota Sloane, a tough-as-nails former foster kid, has spent her life running from the past. Logan Garcia, a man haunted by secrets, has only one goal: to drink himself into oblivion.

They’re two strangers in a bar, until the news reports nuclear bombs in New York City and D.C. But before they can escape Miami, everything explodes.

As buildings collapse and fires rage, utter chaos erupts. Dakota knows of a place to ride out the storm: a safe house deep in the Everglades. If Logan helps her rescue her sister, who’s still trapped in the city, she’ll bring him, too.

But Dakota’s past has caught up to her. Amid the radioactive ruins of Miami, someone is hunting her. And he won’t stop until he has her… or they’re both dead.

The box set includes all five full-length novels:
Point of Impact
Fear the Fallout
From the Ashes
Into the Fire
Darkest Night 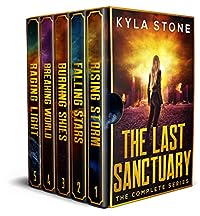 A hijacked cruise ship. Adeadly pandemic unleashed. The fate of the world hangs in the balance… In a near future devastatedby famine and disease, the United States balances on the cusp of collapse–andcivil war.

When terrorists hijack a lavish cruise ship, wealthy Amelia Black is forced into hiding with Gabriel Rivera, an enigmatic stranger with a dangerous secret.

Despite their overwhelming differences–and the killers hunting them–the pair must form an unlikely alliance to survive. As the lines between enemies and allies blur, they uncover a new catastrophic threat: a world-ending bioweapon hidden on the ship.

What starts out as a single, terrifying incident will soon evolve into a race to save mankind from an extinction-level event…
Don’t miss the thrilling apocalyptic/dystopian series exploring what might happen if terrorists unleashed an engineered pandemic that devastates civilization, placing the fate of humanity in the hands of an ordinary group of survivors.