The novels of Noel Hynd stand out! Incredible tension, byzantine plotting, fascinating people. Keeps you off balance and guessing all the way. How it all works out is enthralling and chilling. Fast moving, intriguing and very readable, this spy mystery gets its impact from its intricate plot and complex characterization you will not be able to put these books down. For those who revel in suspicious characters, sinister happenings and baffling mystery, Noel Hynd’s latest novels are for you. Enjoy! 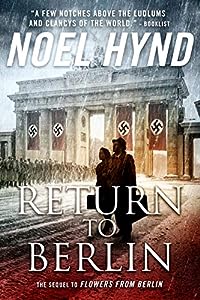 Return to Berlin: A Spy Story
by Noel Hynd

It is early 1943 and the United States has been at war for more than a year. William Cochrane, an agent of the Federal Bureau of Investigation, who was the central character in ‘Flowers From Berlin’, has enlisted in the United States Army. He has the commission of a major and is at Fort Monmouth, New Jersey, training for combat. Suddenly his military orders are countermanded by Washington. He is ordered to report immediately to General William Donovan the Office of Strategic Services in New York City.

At OSS headquarters Cochrane, recently married, receives an assignment more perilous than combat. He is recruited into the fledgling wartime spy agency and assigned to travel to Europe. He is to make his way to Switzerland to meet with Alan Dulles, the Director of the OSS in Switzerland. There, if Cochrane is lucky enough to arrive, he will receive the second part of his orders: an espionage assignment. Under an assumed identity, Cochrane will make a heart-pounding return visit to Berlin, where he lived for a while in the 1930s. There is an assignment vital to the battle against Nazi Germany that only he, with his prior knowledge of people and places in Germany, can complete if he eludes capture by the ever-vigilant Gestapo. Or, with the odds heavily against his success in this assignment, will the assignment cost him his life?

Rich in accurate historical detail, heavily evocative of the terrifying era, ‘Return To Berlin’ is a fast-moving action-packed thriller that will be one of the top American spy novels of Fall 2019.

Love and betrayal, spies and patriots, murder and romance, Roosevelt versus Hitler on the eve of World War Two. “Winds of War” meets “The Eye of The Needle.”

It is 1939. Roosevelt is winding down his second term in the White House. The Nazis have taken Austria, and Stalin’s Red Army is systematically eliminating the Kremlin’s enemies. Europe is going to hell in a handbasket. With isolationist sentiment running high in America, and the president’s popularity at an all-time low, Hitler seizes the moment and dispatches his secret weapon: An agent named ‘Siegfried’ who conceals himself behind the mask of middle-class America. A chameleon who can change identities and personalities at will. A cold-blooded killer who will win the war for Germany.

A banker, linguist, and demolitions expert who has successfully infiltrated German intelligence, FBI Special Agent Thomas Cochrane is handpicked by Roosevelt for an impossible mission: To find Hitler’s spy before he carries out a plan that will remove the president from office at a critical moment in the century’s history. As Cochrane, with the help of British Intelligence agent Laura Worthington, circles closer to his elusive quarry, a spy with supporters in the highest levels of U.S. government readies the world stage for a final act of annihilation that will alter the tide of war–and the future of the free world–in unthinkable ways.

Imagine a world where your most precious inalienable rights are denied. Where individual freedom is a thing of the past. Imagine World War II without FDR…

The Enemy Within – A novel of the U.S. Secret Service
by Noel Hynd, Patrick LoBrutto

It is early summer of 2009, an uneasy time in the American capital. Washington is tense over a showdown between the United States and the new ruler of Libya.

Laura Chapman is a U.S. Secret Service agent assigned to the White House. She is quirky, solitary, and frequently unorthodox. She is sexy and fit, adept with a pistol as well as with a hundred-pound Everlast bag. But she is also a brilliant intelligence analyst. That’s why she has been assigned to the Presidential Protection Detail for the past eleven years.

The CIA assigns Laura to a case that borders on the unthinkable: an assassination plot against the new president. Shockingly, the trigger man will be a member of the United States Secret Service.