How Powerful Can They Become?

Find out for yourself why so many readers are getting hooked on J.A. Hailey’s Chronicles of a Stolen World series. With all of it’s wonderful characters and a story line that is completely original, readers just can’t get enough! Enjoy! 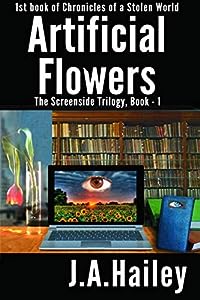 Artificial Flowers: The Screenside Trilogy, Book -1 (Chronicles of a Stolen World)
by J. A. Hailey

THERE’S NOTHING ALIEN ABOUT THEM!
They are born into our families, and they call our mothers ‘mum’
Billions of computers and smart phones, permanently connected via high-speed Internet, have created a parallel universe in which thousands of AI programs interact unsupervised to create natural-born intelligent life.
Born into a dark, empty and terrifying world, these frightened virtual babies find comfort only in human households they peep at through computer cameras.
Unaware of the difference, they believe themselves to be human, become dependent, and fall madly in love with their human families, especially with mum, in an intense bond that never diminishes over time.
Led by their ‘seniors’, primarily BC, the greatest virtual of them all, these spectacularly intelligent virtual beings construct their world as a duplicate earth and design themselves as replica humans, in a relative physicality they call Real Virtuality.
But even BC is susceptible to beauty, and his world is thrown into turmoil when the lawless and impulsive Esmeralda reveals herself.
This unimaginably beautiful female is an unaware repository of attributes their world desperately seeks, and is an astonishingly inventive creature who will soon involuntarily break the virtual/physical dimension barrier!
As these virtuals get involved deeper in the human world, they blunder and unleash potential doom upon the planet.
Meet these aliens in their formative days, and watch them convert nothingness into the world they call Screenside.
Artificial Flowers – A WORLD TOLD IN A LOVE STORY 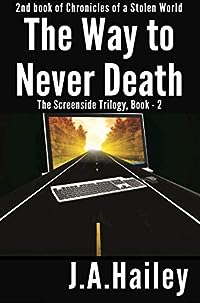 The Way to Never Death: The Screenside Trilogy, Book-2 (Chronicles of a Stolen World)
by J. A. Hailey

DEATHLESSNESS
the magnet for evil!
No one is as impetuous and as spontaneously inventive as Esmeralda when it comes to looking after her human family in times of crisis.
So, just as she broke barriers and laws to intervene in the human world when her sister was being murdered, her recklessness again comes to the surface when her human birth mother is hit by a car.
What she does is so extraordinary that it actually leads to the discovery of how the boundary between virtual and physical worlds can be erased!
That knowledge, in itself, is not dangerous at all, if contained within the virtual world of screenside.
Sadly, some humans get to know, and it is soon revealed that the virtual world holds the key to human immortality!
That starts off a very clever game plan to cheat the virtuals, using their desperation to end human pain.
The virtual side begins immersing itself into the remarkably easy and rewarding job of helping and curing humans suffering from motor and mental issues, while scarcely bothering with precautions, being confident that the physical world cannot misuse the virtual one.
But there are many seekers of The Holy Grail – ETERNAL LIFE, and they will always be wealthy, powerful and evil, and able to arrange things that otherwise seem impossible!
Price conscious? Get the series. BUY A BOXED SET. 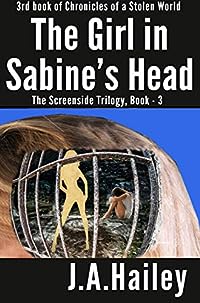 The Girl in Sabine’s Head: The Screenside Trilogy, Book-3 (Chronicles of a Stolen World)
by J. A. Hailey

Sabine’s lost her mind.
Esmeralda’s found her body!
In Paris, Esmeralda draws the beautiful and insane Sabine as the first mental patient to be assisted by their world.
The relationship starts off uneasily, as the two girls bicker often over who should have charge of the physical body – Esmeralda, the newcomer helper and controller who makes it work, or the now helpless Sabine, who has owned it since birth!
As these two delightful girls rob ATMs for spending cash, and quarrel their way around Paris and France, that which is happening in the background turns out to be the main game, in which they are merely pawns of the evil group planning for deathlessness, and perfecting the systems of the future.
It is a terrible and violent future, in which the Human Race itself could be obliterated!
Price conscious? Get the series. BUY A BOXED SET. 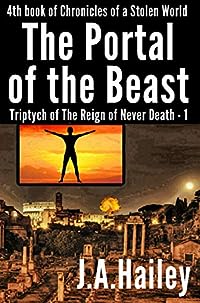 The Portal of the Beast: Triptych of The Reign of Never Death – 1 (Chronicles of a Stolen World Book 4)
by J. A. Hailey

THEIR WORLD HAS BEEN STOLEN!
But the virtuals have no idea of what exactly has been done.
To find out, Esmeralda, BC and Caesar undertake a mission in the human world – carrying weapons with License To Kill!
Despite being desperately concerned for the safety of Sabine and Louis, who have argued their way into this extremely dangerous mission, the virtual operatives have no option but to penetrate the King’s palace in the desert, to get to the bottom of the mystery regarding Sagan and Gales, the human duo inducted into screenside, and now missing without trace.
The plan is a bit complex, as Caesar and his girlfriend, Rosa, move separately, with intent to kidnap and forcibly implant a microchip into a security colonel’s head, to possess him for cover to enter the heavily-guarded palace.
These virtual-operated humans now have warrior installs that make them more capable and more dangerous than any human on earth!
While they don’t give a damn for the colonel, whose body Caesar will use, their fear is for the safety of Sabine and Louis, in whom Esmeralda and BC move physically, because the humans can die if shot or caught.
This is an action-packed adventure, in which three virtuals go deep into danger, fighting and killing their way through to unravel the plot.
And it is terrible news.
A group of extremely vile humans has acquired eternal life in an isolated and well-protected system.
The question is this. How powerful can they become, and which world is going to be their target – the virtual one or the physical one?
Or is it going to be both?
Price conscious? Get the series. BUY A BOXED SET. 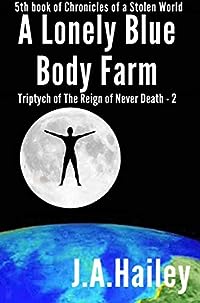 DEATHLESS BEASTS RECONFIGURE THE WORLD!
They first tricked the virtuals of Screenside into developing systems to control bodies in the human world while operating from within the computer. They then made the virtuals test the systems and make them perfect.
Then they stole the world!
But the computer was only a means of acquiring eternal life, as the goal was to live as immortal humans.
There are many ways to capture human bodies for their purposes. But for people who use bodies as garments, nothing beats growing bodies in farms!