I should have a sign in my living room that says, “It’s been X amount of days since Casper had an accident in the house.” If I had one, I would have noticed that he just might finally be house trained. After a month, both Junebug and Casper have discovered that the little doggie door is good for going in and out of the house. For some reason it just wasn’t clicking in their heads that the door worked all the time. I would see them go out through it, but wouldn’t come back in through it. I even took the little flaps off, so they could see directly in or out unobstructed. I used treats, verbal encouragement, manually shoved them through it.  I didn’t know how else to explain to them that they could go through it in either direction. Then one day…. they got it. Now they fly in and out like little furry freight trains. You gotta watch out when you walk past the doggie door. You can get taken out quick! 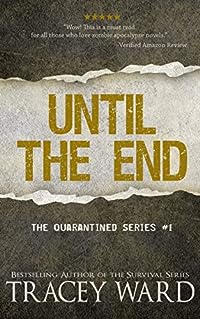 Until the End (Quarantined series Book 1)
by Tracey Ward

An outbreak of The Fever has taken hold of Portland, Oregon, bringing the population to its knees. The Fever spreads and kills quickly, but the dead aren’t staying dead.

When her neighbor, Jordan, saves her from an infected, Alissa joins him in his plan to escape the city, the zombies and the threat of a quarantine that will lock the living in with the undead.

What she doesn’t tell him is that she has an illness of her own, one that plays tricks with her mind and makes her a dangerous companion. But Jordan has a secret as well, one that compels him to keep Alissa, a veritable stranger, safe at all costs.

As they fight for their lives and race for their freedom, they’ll discover that what they truly need in order to survive is to stay together until the end.

*Due to language and violence, this book is not recommended for readers under 16. 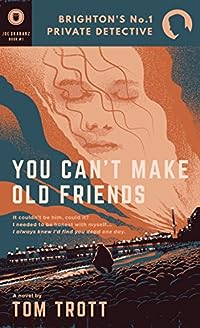 Blacklisted by the police. Being sued by a client. And broke. Things can’t get any worse for Brighton’s No.1 Private Detective, Joe Grabarz, in this blistering debut novel from award-winning writer Tom Trott.

That’s until his best friend’s body washes up on the beach.

Could it really have been ten years? What happened? How could his life have ended like this? He needs answers.

But with the city in the grips of organised crime, and struggling to deal with an influx of legal highs, who cares about just another dead drug dealer? Joe, that’s who. After all, you can’t make old friends. 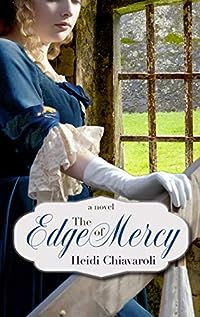 The Edge of Mercy
by Heidi Chiavaroli

Two women, three hundred years apart, must face the devastation of all they hold dear…
Suspecting her husband is having an affair, Sarah Rodrigues fights to appear unbroken while attempting to salvage her family. Though distracted by her own troubles, Sarah is summoned to an elderly friend’s deathbed for an unusual request — find a long-lost daughter and relay a centuries-old family story.

Determined not to fail her friend, Sarah pieces together the story of her neighbor’s ancestor, Elizabeth Baker, a young colonist forced into an unwanted betrothal but drawn to a man forbidden by society.

While Sarah’s family teeters on the edge of collapse, her world is further shaken by the interest of a caring doctor and a terrible accident that threatens a life more precious than her own.

Inspired by the unconditional love she uncovers in Elizabeth’s story, Sarah strives to forgive those who’ve wounded her soul. But when light shines on the dark secrets of her neighbor’s past and the full extent of her husband’s sins, will looking to a power greater than herself rekindle lost hope? 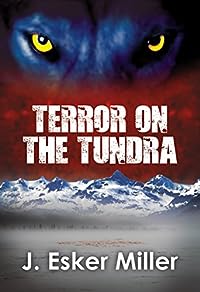 Jim Miller, writing as J. Esker Miller, has five previous thrillers that cover diverse but exciting times. But it was Alaska, the northernmost fringe of civilization, that intrigued him most of all. After years of flying over the desolate landscape and hearing the stories of the people there, he imagined a remote island, a desolate, hostile place where evolution was free to create unique creatures. And so, a single pair of shipwrecked Viking war dogs evolved into terrifying Apex Predators that ravaged the island unchallenged. Eventually, the breakup of Arctic ice floated a few of the beasts to the North Slope of Alaska. There, they faced the valiant townspeople of Chintikook Village. Along with a boyish paleontologist and the local schoolteacher, the humans teamed up to battle the attacking creatures they called Super Wolves.
It’s an adventure that pits the fangs and claws of giant devil dogs against the wits and bravery of a small group of townspeople who don’t know how to give up despite impossible odds. 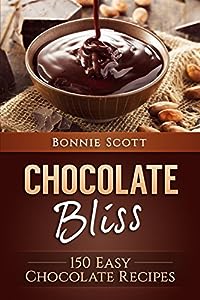 Who doesn’t love chocolate? Now you can indulge yourself and your family with amazing chocolate recipes found in Chocolate Bliss: 150 Easy Chocolate Recipes. This great addition to your cookbook library provides you with dozens of chocolate ideas, including:

It isn’t just cakes, bars, brownies, muffins and cookies that are featured in this book. There are also unusual offerings as well, like chocolate pizza and chocolate covered bacon to tempt you.

Whatever your favorite is, you are sure to find it inside Chocolate Bliss, a book that will rekindle your love of all things chocolate.

Buy Chocolate Bliss: 150 Easy Chocolate Recipes today and see for yourself how quick and easy it is to make delicious chocolate goodies with 150 amazing chocolate recipes.