The One Thing More by Anne Perry

A royalist out to save Louis XVI from the guillotine is murdered in this mystery set in revolutionary France by a New York Times-bestselling master. 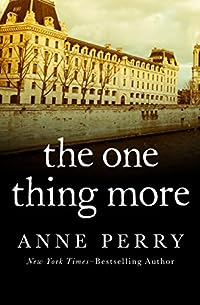 The One Thing More
by Anne Perry

Célie Laurent stands in the convention hall of the French Republic, watching the deputies vote one by one. Most of them have just one word to say: “Death.” As the night wears on, the outcome of the vote moves beyond doubt, and Louis XVI is condemned to the guillotine. Célie will have just four days to save the king’s life.

As the Revolution reaches a fever pitch, Célie falls in with a group of royalists who are willing to do whatever it takes to keep France from killing its king. Their plan is daring, but just might work — until the group’s leader is murdered in cold blood. Somewhere among the royalists lies a traitor, and Célie and her friends must find him soon, lest they lose their heads before Louis loses his.

From the New York Times-bestselling author of the William Monk and Charlotte and Thomas Pitt series, acclaimed for her atmospheric historical settings, The One Thing More is a fascinating tale of suspense.