A “mesmerizing” novel of a love triangle and a mysterious disappearance in South Korea (Booklist). 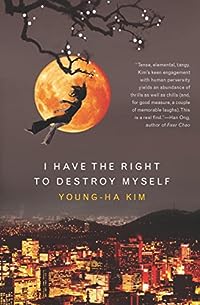 In the fast-paced, high-urban landscape of Seoul, C and K are brothers who have fallen in love with the same beguiling drifter, Se-yeon, who gives herself freely to both of them. Then, just as they are trying desperately to forge a connection in an alienated world, Se-yeon suddenly disappears. All the while, a spectral, calculating narrator haunts the edges of their lives, working to help the lost and hurting find escape through suicide. When Se-yeon reemerges, it is as the narrator’s new client.
Recalling the emotional tension of Milan Kundera and the existential anguish of Bret Easton Ellis, I Have the Right to Destroy Myself is a dreamlike “literary exploration of truth, death, desire and identity” (Publishers Weekly). Cinematic in its urgency, the novel offers “an atmosphere of menacing ennui to a soundtrack of Leonard Cohen tunes” (Newark Star-Ledger).

“Kim’s novel is art built upon art. His style is reminiscent of Kafka’s and also relies on images of paintings (Jacques-Louis David’s ‘The Death of Marat,’ Gustav Klimt’s ‘Judith’) and film (Jim Jarmusch’s ‘Stranger Than Paradise’). The philosophy — life is worthless and small — reminds us of Camus and Sartre, risky territory for a young writer… But Kim has the advantage of the urban South Korean landscape. Fast cars, sex with lollipops and weather fronts from Siberia lend a unique flavor to good old-fashioned nihilism. Think of it as Korean noir.” — Los Angeles Times

“Like Georges Simenon, keen engagement with human perversity yields an abundance of thrills as well as chills (and, for good measure, a couple of memorable laughs). This is a real find.” — Han Ong, author of Fixer Chao