The Samurai Cipher by Ernest Dempsey

At the end of World War II, the greatest Samurai sword of all time vanished without a trace. 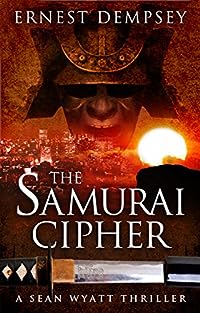 Rumors abound as to its whereabouts.

Some historians claim it was destroyed with the rest of Japan’s weapons. Others believe it is hidden somewhere.
Theories about its location vary from intricate cave systems to monks protecting the blade in a shrine deep in the mountains.

When Sean Wyatt and his longtime friend Tommy Schultz try to help a troubled Japanese woman, they find themselves right in the thick of a power struggle between some of the most dangerous gangsters in the world.
Now Sean and company must race across Japan, unravel clues that were left decades before, and discover the true location of a blade made by the greatest sword maker of all time: Honjo Masamune.