A wonderful blend of adventure and romance, First Queen of the Gryphons is a fantasy romance loosely based on Sumerian mythology. It’s part of the Ishtar’s Legacy series. It can be read as a complete standalone novel. Enjoy! 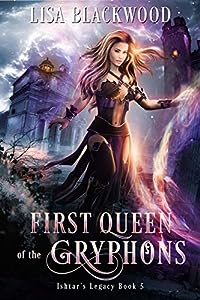 There is a price for pillaging the temple of a goddess…

Hillalum is destined to become a king unlike any other before him, for the Goddess Ishtar has endowed him with a special gift — he is the first gryphon capable of taking on human form.

Amata, a humble shepherdess, wishes only to live a peaceful life until raiders attack her village and kill her father and brother. A consuming need for revenge soon arises from that day.

When King Hillalum’s goddess orders him to watch over a human shepherdess, he thinks he’ll find the sheep more interesting than the woman, but once he meets Amata, he soon understands the full scope of his deity’s plans.

Ishtar wishes to transform Amata into the first of her Avenging Blades — a sacred warrior born into the world when danger stalks the line of the gryphon kings.

But before Amata and Hillalum can complete the ritual to unleash the fierce magic of a goddess forged Blade, they must first win each other’s hearts. Only then will they possess a power great enough to rid their land of the raiders.