Can a robotic man, a trigger-happy mechanical cat, and a bounty hunter with a killer energy sword and an attitude to match save their planet from destruction? Find out in author Michael Mishoe’s Endurance: The Defenders Trilogy: Book One. 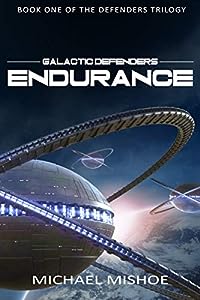 In the year 2132, Earth is under siege by an invasion of robotic aliens known as the Ribiyar. The remaining military forces, calling themselves the Defenders, are desperately fighting to protect their planet, knowing it is only a matter of time before they are overrun. They send a vessel, the U.S.S. Ocean-Walker, on a mission to take out the Ribiyar forces entrenched in the Atlantic Ocean, no matter the cost.

In a place isolated from conflict, a submarine is marooned at the bottom of the Atlantic Ocean, trapped under the wreckage of another vessel that was destroyed at the start of the invasion. With supplies quickly depleting and time running out, her captain partakes in a dangerous procedure in the hopes that he can save his crew before it is too late.

As the stakes of the war continue to rise, and all hope seems to be lost, a warrior is born within the chaos of desperation and bravery. A warrior that just might have the strength to turn the tide of the war and defeat the aliens that threaten to destroy humanity.