With Age And Wisdom

I shouldn’t be surprised that Sinny is taking to the new pup so well. First of all it’s pretty easy to get away from him since Sinny can just jump up onto a chair. He doesn’t always choose to though. He makes little visits to the pup, sniffs him, and checks him out. He doesn’t even flinch when the pup tries to jump on his back. Pup is only able to get halfway up his shoulder, since he is so short. I watched as pup repeatedly jumped on Sinny’s side and even tried digging into his fur a bit. Sinny watched patiently until the pup got distracted and moved on to a rope toy. Sinny’s meow scare pup a bit. I am pretty sure pup doesn’t speak cat. Sinny has shown much more patience than Junebug by far. Must be something that comes with age. 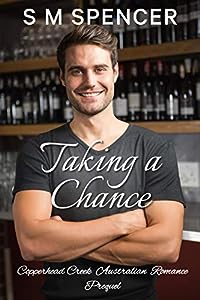 Some people make plans… for the next month, the next year, the next decade. But for others, it’s a matter of taking a chance when the time feels right, or when an opportunity presents itself. Lora knows she’s a bit different to the rest of her family, but when the time comes, can she find the courage to make the decision that is right for her?

Taking a Chance is a SHORT prequel to the six book series, Copperhead Creek Australian Romance. The characters in this story will reappear in subsequent books throughout the series.

All books are clean romances with a touch of spice, having no descriptive sex scenes, no significant violence, and only minor incidences of foul language.

The stories are all set in the imaginary town of Willows, located in Victoria’s Golden Triangle which is the home of Australia’s 1850s Gold Rush. While the town in the series is fictitious, it has been inspired by small towns scattered throughout Victoria and South Australia. 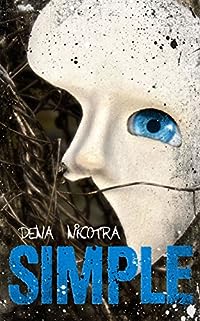 Nothing simple is real.
You will look twice at people… and technology.

The idea of making life simple appealed to the mainstream. After the economic collapse of the twenty-first century, the government latched on to technology like an economic life-line. Bio-synthetic humanoids integrated into society with relative ease. Taking on the menial jobs, humans grew dependent on their android counterparts, but the corporate sector took things too far. Wrapped in their one-click comfort zones, people trudged along with their latte’s and fashion trend blinders.

The dark side of genetic engineering is a harsh reality.
Humans are being hunted.
They don’t stand a chance.

No one seemed to notice that they weren’t acting as hospitable as they once had. They should have. They didn’t have weaknesses like we did, and, they were capable of clever, unimaginable cruelty.

Those that have survived call the rogue bio-synthetic humanoids “simps” because the company that started the mess had a cheesy marketing campaign that said they made life “Simple.” They couldn’t have been more wrong. When the war broke out, simps were used to spare human losses. It was viewed as a brilliant solution until a developer working for the enemy infected the simps with a virus that caused them to turn on the humans they served. They couldn’t shut them down fast enough.

Fans of Isaac Asimov will appreciate this fast past thriller, although the three laws of robotics never applied to simps! This cyberpunk tale is set in the year 2038.

Hailey Pachello doesn’t do people. She relies on herself because it’s easier. It’s safer, and it’s less dramatic. That is until she meets Leonard ‘Gizzard’ O’Malley. Giz has connections and a plan, and it might just be a good one.

Join Hailey as she embarks on her wondrous adventure, in a timeless, powerful, and memorable cyberpunk thriller. 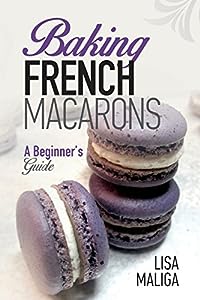 Bake beautiful and delicious French macarons in your own kitchen. This collection of tried-and-tested recipes allows bakers to create these tasty and colorful confections.

The author details what equipment and ingredients you need, offers numerous helpful tips, resources, and shares more than 30 recipes for you to whip up an array of elegant French delicacies.

Full of inspiring color photos, Baking French Macarons: A Beginner’s Guide, offers everything you need to bake stunning macarons that will impress anyone who tastes them.

Some of the flavors include Cinnamon Caramel, Tangy Orange, Key Lime, and Acai macarons. 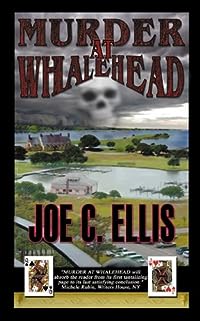 Murder at Whalehead is the ultimate beach read. On the northern Outer Banks looms an old hunting lodge known as the Whalehead Club. During the roaring twenties Edward and Marie Knight entertained guests at this isolated Mansion by the Sea. Now it has become one of North Carolina’s most popular tourist attractions. Less than a quarter mile away deep in the marsh along the Currituck Sound lies the body of a young woman. Someone has killed and craves to kill again. In his new novel, Murder at Whalehead, Joe C. Ellis tells the story of two Ohio families vacationing on the Outer Banks. They look forward to sun, sea, rest, and relaxation. Instead, they cross paths with a homicidal maniac. Can they stop him before another innocent victim dies? 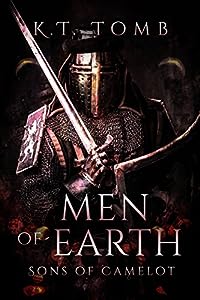 Men of Earth (Sons of Camelot Book 1)
by K.T. Tomb

In the SONS OF CAMELOT series, the newly formed Sons of the Round Table take up the sword in the name of King Arthur. Eight young men must deal with a growing menace in the north. A high adventure of love, loss, treachery, and redemption balances the mortal world with the faerie world. There will be dire consequences when the two worlds collide.

MEN OF EARTH begins the noble tale within the mists of Avalon as Rhys, a page for Morgana le Fae, is chosen to compete for the honor of becoming a Son of the Round Table. He’s been learning the sword, the spear, and the shield?and seeks to use them for a higher purpose.

Rhys is eager for the adventure, but he must leave his beloved Naida behind?she’s a faery who’s been warned that strange forces are crossing into the Earth world. Worse, their love is forbidden. But the heart wants what it wants.

As Rhys bravely obeys King Arthur’s call to arms, danger lurks at every turn and a dark-cloaked stranger pursues him…

MEN OF EARTH is the first book in the SONS OF CAMELOT series, an epic adventure of knights, faeries, dark magic, and courage beyond all reason.