An Untamed State by Roxane Gay

A Haitian American woman survives a brutal kidnapping in this “commanding debut novel” from the New York Times-bestselling author of Bad Feminist (The New Yorker). 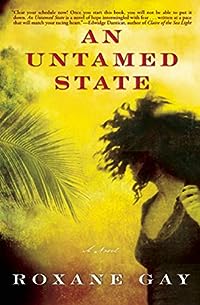 An Untamed State: A Novel
by Roxane Gay

Author and essayist Roxane Gay is celebrated for her incisive commentary on identity and culture, as well as for her bestselling nonfiction and short story collections. Now, with An Untamed State, she delivers a “breathtaking debut novel” (The Guardian, UK) of wealth in the face of crushing poverty, and the lawless anger produced by corrupt governments.

Mireille Duval Jameson is living a fairy tale. The strong-willed youngest daughter of one of Haiti’s richest sons, she lives in the United States with her adoring husband and infant son, returning every summer to stay on her father’s Port-au-Prince estate. But the fairy tale ends when Mireille is kidnapped in broad daylight by a gang of heavily armed men, just outside the estate walls. Held captive by a man who calls himself The Commander, Mireille waits for her father to pay her ransom. As her father’s standoff with the kidnappers stretches out into days, Mireille must endure the torments of a man who despises everything she represents.

An Untamed State is a “breathless, artful, disturbing and original” story of a willful woman attempting to find her way back to the person she once was, and of how redemption is found in the most unexpected of places (Meg Wolitzer, author of The Interestings).