How Far Would You Go?

The #1 New York Times bestseller from Brandon Sanderson, the author of Oathbringer, coauthor of Robert Jordan’s The Wheel of Time series, and creator of the internationally bestselling Mistborn trilogy. And don’t miss the rest of the Reckoners series: Firefight and Calamity. 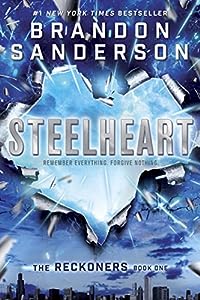 How far would you go for revenge if someone killed your father?
If someone destroyed your city?
If everything you ever loved was taken from you?
David Charleston will go to any lengths to stop Steelheart. But to exact revenge in Steelheart’s world, David will need the Reckoners — a shadowy group of rebels bent on maintaining justice.
And it turns out that the Reckoners might just need David too.
Look for book two in the Reckoners series, Firefight, available now. 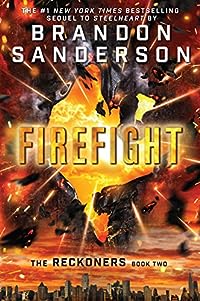 Newcago is free.
They told David it was impossible, that even the Reckoners had never killed a High Epic. Yet Steelheart–invincible, immortal, unconquerable–is dead. And he died by David’s hand.
Eliminating Steelheart was supposed to make life simpler. Instead, it only made David realize he has questions. Big ones. And no one in Newcago can give him answers.
Babylon Restored, the city formerly known as the borough of Manhattan, has possibilities, though. Ruled by the mysterious High Epic Regalia, Babylon Restored is flooded and miserable, but David is sure it’s the path that will lead him to what he needs to find. Entering a city oppressed by a High Epic despot is risky, but David’s willing to take the gamble. Because killing Steelheart left a hole in David’s heart. A hole where his thirst for vengeance once lived. Somehow, he filled that hole with another Epic–Firefight. And now he will go on a quest darker and even more dangerous than the fight against Steelheart to find her, and to get his answers. 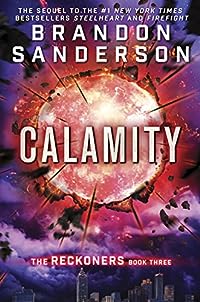 When Calamity lit up the sky, the Epics were born. David’s fate has been tied to their villainy ever since that historic night. Steelheart killed his father. Firefight stole his heart. And now Regalia has turned his closest ally into a dangerous enemy.
David knew Prof’s secret, and kept it even when Prof struggled to control the effects of his Epic powers. But facing Obliteration in Babilar was too much. Once the Reckoners’ leader, Prof has now embraced his Epic destiny. He’s disappeared into those murky shadows of menace Epics are infamous for the world over, and everyone knows there’s no turning back… But everyone is wrong. Redemption is possible for Epics — Megan proved it. They’re not lost. Not completely. And David is just about crazy enough to face down the most powerful High Epic of all to get his friend back. Or die trying.