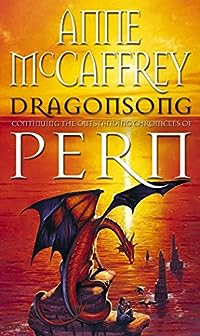 Every two hundred years or so, shimmering Threads fall from space, raining death and black ruin on Pern. The great dragons of Pern hurl themselves through the beleagured skies, flaming tongues of fire to destroy deadly Thread and save the Planet. But it was not Threadfall that made young Menolly unhappy. It was her father who betrayed her ambition to be a Harper, who thwarted her love of music. Menolly had no choice but to run away. When, suddenly, she came upon a group of fire lizards, wild and smaller relatives of the fire-breathing dragons, she let her music swirl around them. She taught nine of them to sing. Suddenly Menolly was no longer alone — she was Mistress of Music and Ward of the dazzling fire dragons.